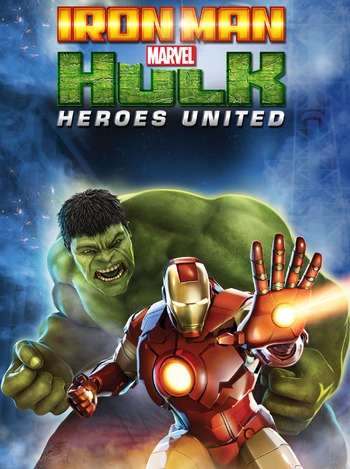 The Science Bros return!
Iron Man & Hulk: Heroes United is an animated CGI movie released by Marvel Animation, featuring a team-up between Iron Man and the Incredible Hulk. The film features the two heroes teaming up to fight Zzzax, a powerful being made of electrical energy. The movie features Adrian Pasdar as Tony Stark/Iron Man, and Fred Tatasciore as the Hulk, Dee Bradley Baker as Zzzax, and a number of other Marvel animated projects.
Advertisement:

According to Marvel TV head Jeph Loeb, the movie does not have any explicit continuity ties to the Marvel Cinematic Universe, though it could potentially be seen as a bridge between The Avengers and Iron Man 3.