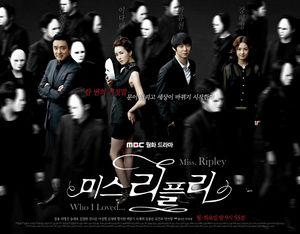 Miss Ripley is a 16-episode Korean Drama. It is loosely based on the well publicized 2007 case of Shin Jeong-ah, a professor who forged her academic credentials to climb the social ladder.

Miss Ripley follows the story of Jang Miri, an orphan forced into becoming a bar hostess in Fukuoka's red light district in order to pay off her adoptive father's debt. She manages to escape to South Korea, and vows to become safe and successful, no matter what she has to do—lie, cheat, steal—in order to rise to the top.

Miri is told that she cannot remain in Korea without a steady job, which she cannot find due to her lack of credentials. Miri is desperate not to return to her old life, so after a series of events lead Jang Myung-Hoon, the managing director of Hotel A to assume that she holds a degree from the prestigious Tokyo University and offers her a job at his hotel, Miri lies about her credentials and takes the job. Meanwhile, Song Yoon-hyun, Miri's neighbour at her boarding house and secretly a chaebol's heir, meets Miri and instantly falls for her.

Miri later runs into the cheerful, good hearted Moon Hee-joo, a childhood acquaintance who she holds indirectly responsible for Miri's terrible life...and who happens to have a degree in Architecture from Tokyo University. After becoming roommates, Miri takes the opportunity to steal Hee-joo's diploma so she could make a forgery from it. As Miri continues to try to rise to the top and both Myung-Hoon and Yoo-hyun becomes involved in her schemes, her lies begin to stack up like a house of cards which then starts to collapse...