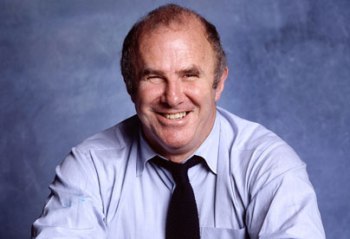 Vivian Leopold James (7 October 1939 – 24 November 2019), better known as Clive James, was an Australian-British journalist, critic, poet, novelist and TV presenter who gained fame in the United Kingdom from 1972 on thanks to his thought-provoking interviews and witty analysis of politicians, literature, music, art, film and television, published in various newspapers, magazines and periodicals. His television column in "The Guardian", published from 1972 to 1982, brought in many new readers and subscribers.

He was very prominent throughout the 1980s and early 1990s on ITV and The BBC where he presented various talk shows ("Saturday Night Clive", "Sunday Night Clive"), travel series ("Postcards"), documentaries ("Fame In The 20th Century"), Formula One races (the 1982, 1984 and 1986 seasons), programmes showcasing unusual footage from foreign TV shows ("Clive James On Television") and New Year shows looking back at the past year via archive footage. Sadly most of James' TV work is a case of Keep Circulating the Tapes. Snippets of his talkshows do turn up on Youtube from time to time, but will likely not see reruns or a DVD release soon seeing that he often poked fun at archive footage from other TV stations for which copyright needs to be paid. Another example of this is his ambitious 1993 documentary series Fame In The 20th Century, about celebrities in the 20th century. The show used a lot of archive footage and clips from films and TV series, again bringing copyright problems into the mix. There is a book about the series, though, and it is available online on James' personal web site. On the Internet itself there is hardly any footage of this interesting series to be found.

In his final years he had predicted that when he did pass away the archive would be reopened in tribute - and this is almost exactly what happened with The BBC repeating some of his Postcard series and making them available on streaming.

James wrote many books on literary criticism, essays and poetry. In 2013 he translated The Divine Comedy into English.

His personal site can be viewed here: [1]