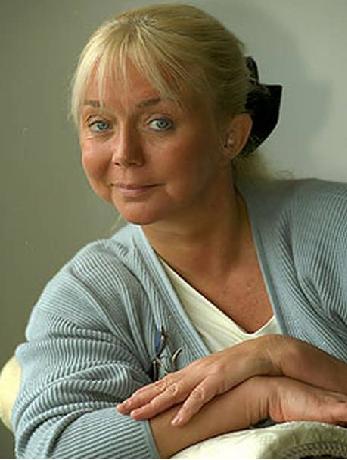 A cheery voice, a dodgy joke, opinions Margaret Thatcher might have thought extreme... and we loved her.
Advertisement:

A quintessentially British radio presenter, now retired, who presented an early morning radio show on BBC Radio Two for fifteen years. She previously worked on TV in several shows, most importantly the set-up show Game for A Laugh. Her performance style on radio was characterised by fumbling, bumbling, on-air gaffes, ocassional lapses into non-politically correct jokes and references, and the suggestion that she sometimes arrived at work in an over-medicated state. A typical slice of possibly over-medicated Sarah was preserved for posterity here

Despite this, her on-air personality, reminiscent of a boarding school matron, was loved by many fans, who protested vocally when her association with the BBC was severed in mysterious and still unexplained circumstances in 2009.

This radio presenter's career presented examples of these tropes: