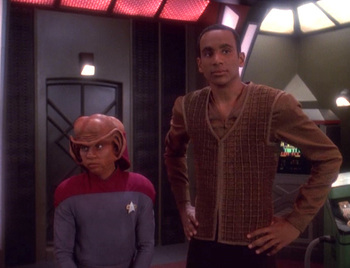 The ultimate "Jake & Nog get into all sorts of wacky hijinks" episode.
The mood aboard DS9 has grown dark and despondent as the threat of the Dominion has intensified; not even Captain Sisko can raise his crew's spirits (especially since Kai Winn is stopping by). But Jake has a plan to lift his father's spirits when he sees a mint-condition 1951 Willie Mays rookie baseball card is among the items in Quark's auction. He figures it'll be a simple task to show up, bid on the card and make it a gift for his father.

Of course, it's not that simple. Jake is outbid by the eccentric scientist Dr. Elias Giger, who leaves with the card. Not to be outdone, Jake bargains with Giger to buy the card off him, but Giger's price sends Jake and Nog all over the station gathering seemingly random items and having to trade for them with even more favors for individual members of the crew.

Just when it seems that they've got all the items they need, they return to Giger's quarters to find that he and his equipment have vanished. Jake, still obsessed the card, blames Kai Winn for the disappearance (she must have wanted the Bajoran artifact in the same auction lot!) and confronts her, barely avoiding a diplomatic incident and getting chewed out by Sisko. Almost immediately, though, Jake and Nog are abducted by the Jem-Hadar.

Weyoun, it turns out, had the quarters directly above Giger's, detected the weird noises of Giger's equipment, and jumped to the conclusion that he was being spied on. After all, Giger's been visited by a Federation citizen and a Starfleet cadet, who've also been in conference with the station commander and the Bajoran Kai! Jake finally confesses to what he's after, and after a moment Weyoun believes him. The Vorta releases both boys and Giger, and gives Jake the card as a memento.

By complete coincidence, Nog's Chain of Deals includes doing morale-boosting favors for the entire senior staff, and Giger finds an earnest fan in the form of the Vorta. So everything ends for the best.

This episode contains examples of