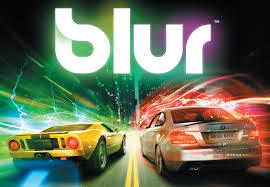 Released in May 2010, Blur is the first racing game from Bizarre Creations since their takeover by Activision in 2007 (and their second overall, following Geometry Wars Retro Evolved 2). The best way to describe it is a Mascot Racer with the look of a standard racing game (sort of Project Gotham Racing meets Mario Kart). Hilarity Ensues as up to 20 real-life cars at once are engaging in weapons-based combat.

Blur has examples of