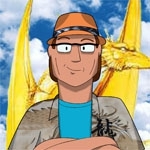 That guy in the orange hat? Yep, thats AniMat.
"In the world of animation, there is known to be a legend. A wise man with all the knowledge of its history. A critic in pursuit of excellence. An expert on the world of Disney. There are many more thing to say about this legend, but you may know him more as AniMat."
— YouTube Channel Trailer

AniMat (a.k.a Mat Brunet) is an internet reviewer on RVT and has several main shows, all focused on animation. The shows are:

You can view his videos at the above links, as well as on his YouTube channel

. He also used to have a Blip account, but it is now deleted due to Blip shutting down. A Recap of the episodes of his shows can be viewed here.

Here is a list of all the animated films AniMat has reviewed, both regular and Classic Reviews, along with non-animated films or other media that he's reviewed. Please note that this does not include any films or other media that he only reviewed via crossover, such as the Scary Godmother duology review with Hewy Toonmore or the live-action Smurfs review with Cartoon Palooza. Bolded denotes films that he's reviewed in his Classic Reviews. Italics denotes special reviews that were requested by fans via Patreon. Bolded Italics denotes films reviewed in AniMat's Classic Reviews that were requested by fans via Patreon. Also, while the film are listed in alphabetical order, the only time they won't be is if a film and it's sequel(s) get the same rating, in which case, they will be listed chronologically.

Advertisement:
open/close all folders
Films He's Given the AniMat Seal of Approval

Films That Don't Have Either Seal

Films He's Given the AniMat Seal of Garbage

Not given any rating

AniMat lists off the movies that will be coming to 2021, only for the list to be moot due to COVID-19.

Example of:
What Could Have Been

AniMat lists off the movies that will be coming to 2021, only for the list to be moot due to COVID-19.