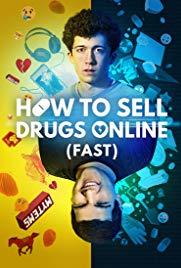 How to Sell Drugs Online (Fast) is a German Netflix original series created by Philipp Käßbohrer and Matthias Murmann. The first season premiered on 31 May, 2019.

The series centers around Moritz Zimmerman, who starts selling drugs with his best friend Lenny Sander, because his girlfriend, Lisa Novak, broke up with him after a year abroad in America. After some stalking through his girlfriend's Facebook, he learns that the school's resident drug dealer Dan Riffert is giving her ecstasy. In an attempt to get back his girlfriend, Moritz starts selling drugs (using a project made by Lenny that failed to be funded) while facing all the problems with it: his cop dad and a drug dealer who wants his money back, eventually becoming one of Europe's greatest drug lords.

How to Sell Drugs Online (Fast) provides examples of: