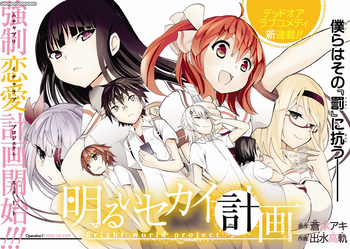 The minister's aide has a project in mind to help correct the declining birth rates in Japan. Thus begins the "Bright World Project", where students are paired up or killed off after a period of time. While nearly everybody does pair up eventually, nine students fail to do so, and thus are given challenges by the minister's aide. Will they be able to couple up before they are all killed?

These nine students include: