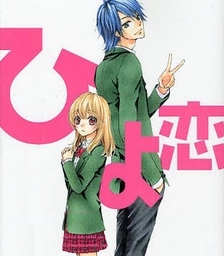 Well, she has to stretch her neck a bit to gaze into his eyes!
Advertisement:

Nishiyama Hiyori (140cm, 4'7 ft at the start of the manga) has just entered high school after recovering from an accident the day before her entrance ceremony.

But, being as shy as she is, can barely introduce herself to the class. Once she finally works up to courage to do so, she is interrupted by Hirose Yuushin (190cm, 6'2 ft). It all goes downhill from there.

Hiyokoi is a high school romance shoujo manga by Yukimaru Moe that started in 2009. An OVA by Production I.G was produced in July 2010 as a twenty-two minute long film.

For a manga couple with the opposite height relationship, see Lovely Complex.