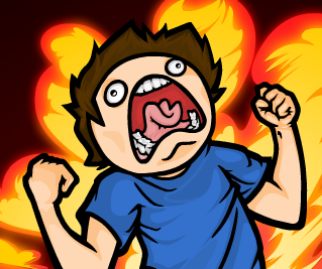 Who'd have thought that one roommate

could cause this much rage?
Advertisement:

is a webcomic by John Kleckner. hejibits started when John posted some of his drawn works of which he posted on deviantART which were the first of the roommate comics. They were received well, and various friends of his inspired him to make the webcomic, which has been running since 2010.

The current content of the comic ranges from being a typical gaming comic to reflecting on the many real-life instances of which John has to put up with on a daily basis (most notably revolving around his roommate in the earlier comics). The format of the comics itself is a mixture of that of Awkward Zombie's comics with the content and hiimdaisy's Persona 4 comics with the facial expressions of which are used within the comics...except far more exaggerated.

Tropes that apply to Hejibits: