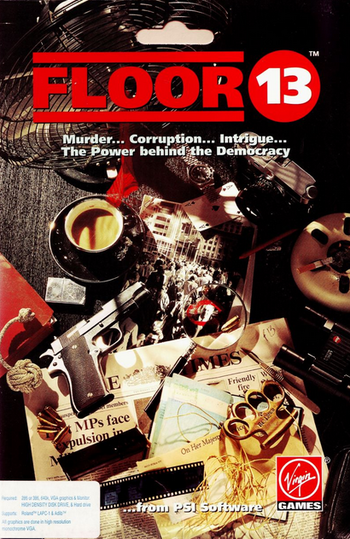 "In a democratic society like our own, how does an elected government keep its popularity? How are scandals averted, subversive elements controlled, undesirables eliminated, and incidents covered up? Just how does the government keep in power?"
Advertisement:

Developed by PSI Software Designers and published in 1992 by Virgin Interactive, Floor 13 is an odd but unique strategy game for Amiga and DOS PCs. The game is set in Great Britain, where the player is promoted to the Director General of the Department of Agriculture and Fisheries to replace the last DG who suffered a fatal case of defenestration.

Of course, the Department is merely a front to the player's actual task - to keep the Prime Minister and the Government popular while avoiding drawing too much attention. The player is presented with a variety of cases ranging from defecting politicians to secret societies. At the player's disposal are tools such as search teams, assassins and heavy assault squads. Failure to keep the Government popular will result in the player being fired, while being "too loud" will result in a certain Mr Garcia defenestrating the player like their precedessor.

To further complicate the game, the player is a member of a secret society as well, and has the option of completing their missions along with their usual duties in the department.

It is now Abandonware, and can be played online