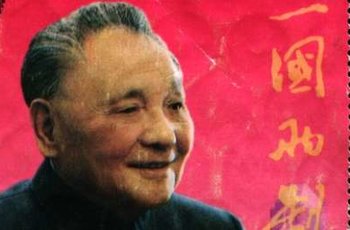 "The Architect of Modern China"
"To get rich is glorious."
Advertisement:

Deng Xiaoping (1904-1997), aka the Architect of Modern China aka the Tian'anmen guy, was the Paramount Leader (note the title "Paramount Leader"; Deng was never president) from 1978 until his retirement from the position in 1989 (though he remained a powerful figure in China until his death in 1997), most notably known for transitioning the nation from the Mao Zedong years into its current phase of history.

Born in Sichuan Province to a landowner family, Deng studied in France and later the USSR in the '20s, becoming a staunch supporter of the growing Communist movement in China, and returned to his home country to live an autonomous communist enclave set up by Mao. He participated in the famous Long March and served as the commissioner of the Eighth Route Army, and following the Chinese Civil War and subsequent Communist victory, became regional leader of Southwest China. Despite his rapid rise through the ranks, Deng came in conflict with Mao due to his ideas of forming technocratic systems in a method to develop the economy. Mao, a communist to the root, wanted nothing of Deng's capitalist ideals, and had him purged during the Cultural Revolution, where he was stripped of his titles and "disappeared".

In 1978, two years after Mao died, Deng took control of the country and started the Special Economic Zone (SEZ) experiment. He declared that to get rich is glorious, and caused China to become less communist than it had been under Mao. Deng's reforms transformed the country's economy immensely. When he first ascended as leader, China was an extremely poor country, having been drained by the various conflicts and the failed policies instituted by the experimental Mao, and had a GDP per capita ($155) that was in the world's bottom 10, being dwarfed by countries such as Afghanistan, Burundi, and Haiti. At the time of Deng's death in 1997, the GDP per capita had quintupled ($775), and would continue to increase exponentially as China catapulted to become the world's second biggest economy in 2010, even if he never saw it.