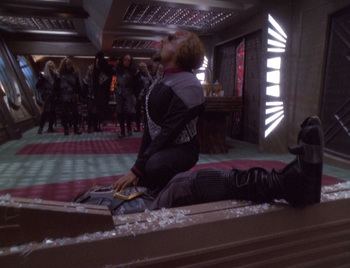 When it becomes apparent that Gowron is sabotaging the war effort in order to bolster his political career, Commander Worf is forced to take extreme measures to prevent the destruction of the Klingon fleet. Back in the Dominion, Kira assists Damar's resistance movement, but some of the Cardassians are not happy to be taking orders from a Bajoran. When the motley crew attempts to steal a Breen weapon from a Dominion starbase, the team is pushed to the breaking point. On the station, Bashir and O'Brien come up with a scheme to find a cure for the morphogenic virus, and not a second too late; behind enemy lines, Odo's condition takes a turn for the worse.