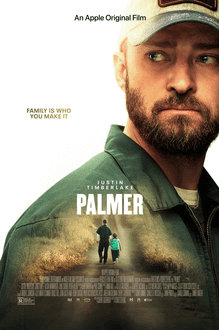 Palmer is a 2021 American drama film, directed by Fisher Stevens and starring Justin Timberlake, which premiered on Apple TV+ on January 29, 2021.

This film is about Eddie Palmer, a high school football star and felon who is released from prison, and lives with his grandmother, Vivian, who watches over a flamboyant little boy named Sam who is the neighbor.

Vivian shortly dies afterwards, and Palmer now has to take care of Sam. Palmer at first is annoyed by Sam's lifestyle but eventually bonds with the boy and slowly starts to accept him in the small town they live in, in the South, and also building a relationship with Sam's teacher Maggie.