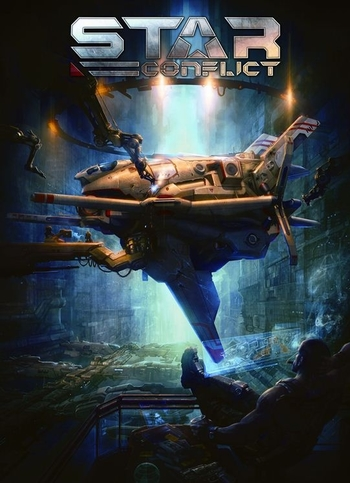 Star Conflict is a Free-to-Play Sci-fi Flight-Sim MMO. It is being developed by Gaijin Entertainment, who are also behind the popular War Thunder, and was first released on February 27th, 2013.

The game is based on Player versus Player battles between two teams. There are various PvP game modes, including Team Deathmatch, Domination (3 beacons; capture and hold them), Beacon Hunt (king of the hill style), Combat Recon, where one player is designated captain, and the other players can respawn an unlimited number of times as long as he is still alive. The game also offers PvE missions, pitting four players against waves of enemies to complete missions across three rounds (with the exception of Fire Support and Defense Contract; those only have one) per map. Open Space/ Invasion, the third mode, is an open world sandbox where players can complete assigned missions, gather resources for crafting, or pursue a career as a law abiding citizen / lawless pirate. Finally, there is a "Custom Battle" mode which provides players with tremendous opportunities for choosing the type of gameplay that suits them best.

The game has four ship classes as of Season 3: light and fast interceptors, powerful fighters, well-defended frigates, and slow but deadly destroyers. Each class has three roles - they can be fitted with various modules appropriate for said roles: ECM, Recon, and Covert Ops for interceptors, Gunship, Tackler, and Command for fighters, and Long Range, Engineering, and Guard for frigates. Destroyers only have one role, named Suppressor. In addition, each role has a unique special ability that provides benefits, making it easier for players to determine what course of action they want to choose on the battlefield.