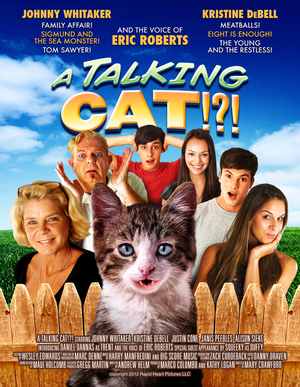 Phil: You can talk? But only once?
Duffy: I don't make the rules, Phil.note Bill: Or explain why there are rules, or where the rules come from.
Advertisement:

A Talking Cat!?! (yes, with that exact interrobang punctuation) is a 2013 "family comedy" film directed by David DeCoteau about... a talking cat who helps a couple of families with their problems.

Duffy (Eric Roberts) is a stray cat with the ability to talk to any person once, but only once. When he comes across Phil (Johnny Whitaker), a respected programmer who's recently entered retirement, and Susan (Kristine DeBell), a caterer who's trying to keep her business and family together, he decides to help them and their families. Hilarity Ensues... or, at least, it tries to ensue, anyway.

Made on a budget of $1 million,note To put that in perspective, Fruitvale Station cost $900,000 to produce. the film nonetheless features amateurish camera, sound and special effects, is largely confined to two houses and Roberts sounds like he's recording his lines through a burner phone in a public bathroom.note It was later discovered that Roberts recorded all of his dialogue in his living room in 15 minutes. Nathan Rabin called it

"The Room of anthropomorphic animal movies starring Eric Roberts" and wondered "where the other $990,000 went".

JonTron and The Cinema Snob did reviews

. It was also covered on Episode 28 of the bad-film-review podcast, Tranquil Tirades. In August 2018, it was targeted by RiffTrax, and it was the subject of a 2021 How Did This Get Made? episode.