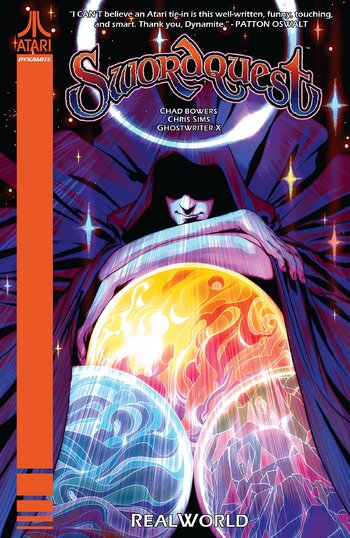 Swordquest: Realworld is a 2017 comic-book miniseries by Chad Bowers, Chris Simms, and Ghostwriter X, and published by Dynamite Comics. It is inspired by the Atari game Swordquest and its comic-book adaptation.

Back in 1984, Peter Case was on his way to winning the four Swordquest contests and earning a $50,000 sword. But then The Great Video Game Crash of 1983 happened, the fourth Swordquest game and contest never happened, and nobody won the sword. Fast forward to the present, where Peter learns that he's got degenerative lung disease and has less than a year to live. When his apartment building burns down, forcing him to move back in with his mother, he finds his old Swordquest paraphernalia and is inspired to track down and steal the lost sword.