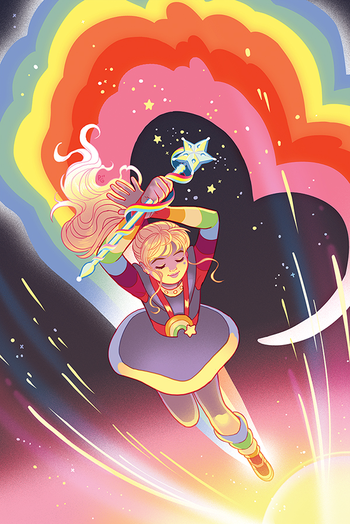 Rainbow Brite was a 5-issue comic book series by Dynamite Comics, based upon the 80s incarnation of Rainbow Brite. It ran from October 2018 to February 2019. It was written by Jeremy Whitley, writer of Princeless, with art provided by Britney Williams, who illustrated Marcy and Simon among other things.

Wisp lives in a small town with her best friend, Willow, and they love pretending to go on fantastic adventures. One night, Wisp sees monsters trying to steal the colors from the world, and is told by the magical Star Sprite Twinkle that she has been chosen to be Rainbow Brite, the only one who can save the captured Color Guard and return the stolen color to Earth. While Wisp doesn't think she's hero material, she journeys to Rainbow Land in an attempt to save the Color Guard and stop Murky, Lurky, and the King of Shadows. Wisp must find the courage in herself to become Rainbow Brite before all the world's color is taken.