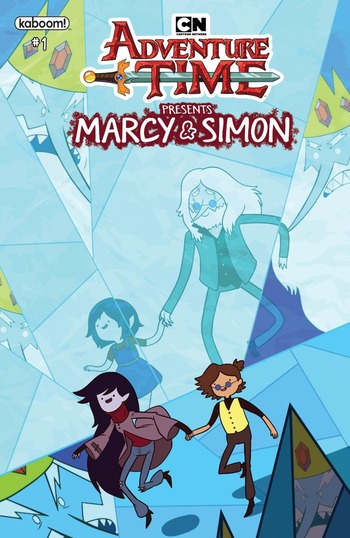 Even finally reunited, there's some loose ends to wrap up.
Advertisement:

Marcy and Simon is a comic set in the universe of Adventure Time. Taking place after the events of the finale, the comic depicts the adventures of Marceline and Simon, as the former tries to help the latter atone for his days as the Ice King. But when Simon’s memory begins to fail, Marcy must work together with Finn, Jake, and Princess Bubblegum to save Simon and help him in his quest to make amends for his time as Ice King. To do that, Simon sets out with one goal in mind: save Betty from Golb, by any means necessary.

Published by BOOM! Studios and written by Marceline's own voice actress, Olivia Olson, the first issue of the 6-issue miniseries was published on January 16th, 2019. Here's a preview

of the first issue.

Marcy and Simon provides examples of: