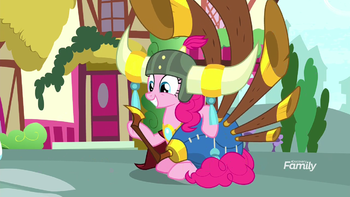 Fluttershy, while walking with Angel Bunny in the forest, hears what seems like the calls of an animal in pain and races to find it. Instead, she finds Pinkie Pie playing a musical instrument called the yovidaphone, which she got from Yakyakistan. Pinkie says she's only just learning how to play, explaining its dissonant sound.

Later, Pinkie starts practicing in town, upsetting the residents. The Mane Six, seeing how attached Pinkie is to the instrument, agree to let Pinkie be, given she is only learning the instrument and should get better. However, after a few days, Pinkie's yovidaphone playing is as bad as when she started, and has gotten in the way of everypony's regular routines: Rarity's fall line has become a mess, Rainbow Dash got distracted during a Wonderbolt race and ended up in second place, Fluttershy and her animals have lost sleep, and Applejack's entire apple crop has been turned into mush. Recognizing that they should really tell Pinkie she's not getting better rather than pretend she is, the others explain to Pinkie how her playing is annoying the rest of town. Pinkie pauses and seems to agree, dumping the yovidaphone in the street, seemingly ending the problem. However, Pinkie cries to herself as she watches the yovidaphone be taken out with the trash that night.

When the Mane Six next see Pinkie, they see that she's lost all her emotions. Knowing that Pinkie had loved playing the yovidaphone, they try to engage her in activities that she also loved to do, but cannot break her out of her depression. When they go to visit her a few days later, they discover Maud Pie is packing up all of Pinkie's belongings, as she is moving back to the rock farm. Maud also tells them that Pinkie went to Yakyakistan to spend a few days there.

The Mane Six travel to the yaks and discover Pinkie wallowing in her depression with ice cream, while listening to a yak playing a yovidaphone with great skill, making the instrument sound pleasant to hear. They try to coax Pinkie to come back to Ponyville, but she's further depressed that she would never be as good as the yaks on playing the yovidaphone. This gives the Mane Six an idea, and they convince Pinkie to take the stage and show the assembled yaks how she plays, hoping this would help break Pinkie's mood. Despite knowing the yaks' temperament, Pinkie agrees to try it, and as she plays, still as discordant as before, she regains her normal happy self. To the ponies' surprise, the yaks applaud Pinkie's performance, as they tell her that it is not so much the music that the yovidaphone makes that makes it great, but how it brings joy to those that play it. The Mane Six are relieved to have their Pinkie back, while she, pleased as punch, continues to play on.