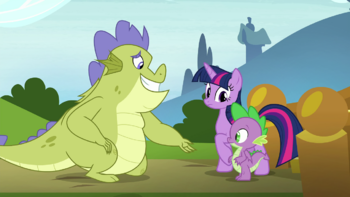 Spike is practicing flying with Twilight but is struggling with more complex maneuvers when Smolder comes along and points out that since a dragon's wings aren't feathered like a pegasus or alicorn's, dragon flying techniques are different. With Smolder's help, Spike's flying improves.

When Spike goes into town to give Smolder a thank-you gift for the flying lesson, a large fireball crashes in front of them. It turns out to be Sludge, a somewhat pudgy adult dragon, who has injured himself in his crash. Spike offers to help Sludge recuperate at Twilight's castle with the help of the Mane Six. While Sludge is reluctant to accept help from ponies, he nevertheless agrees to the help. Sludge makes a recovery, and while thanking everyone for their help shows amazement at how Spike has thrived in Ponyville. When Spike reveals he was orphaned as an egg, Sludge suddenly confesses that his arrival was no accident, and that he is Spike's father.

Sludge tells a tale of how Spike's mother was sent out to scout a new migration path, and Sludge had decided to go after her, taking Spike's unhatched egg with him, so they could be together as a family, but Sludge ended up captured by a group of dragon-hunters. Despite a few gaps in the story, Spike accepts it at face value, and is eager to bond with his newly-discovered father. Sludge doesn't take much interest in Spike's activities, though, and decides he needs to teach him how to be a "real" dragon.

Twilight is initially supportive of giving Spike the opportunity to express his inner dragonhood, but she becomes concerned when it starts to appear that Sludge is taking advantage of Spike. At the elder dragon's request, Spike has given up his room and creature comforts, and begun living in the outdoors, while Sludge enjoys the creature comforts himself. Spike, ready to do anything his "dad" says, dismisses Twilight's concerns as jealousy that he's found a real parent and doesn't need her anymore. Later, Smolder finds him outside, and points out the inconsistencies with what Sludge has been teaching Spike and her own experience in dragon culture, finally getting Spike to realize that he's been used.

Sludge next sees Spike packing up and preparing for them to move out of the castle for good, into a cave chosen by Smolder. When Sludge resists, insisting that Spike still needs to learn more about being a dragon, Spike insists he's learned enough and is ready for them to go. The sting operation set up by Spike and Smolder works, forcing Sludge to admit that he lied about being Spike's dad because he became accustomed to the luxuries of the castle and didn't want to give them up. Smolder is quick to deny Sludge's claim that it's what any dragon would've done. Sludge leaves; afterwards, Spike makes up with Twilight and reaffirms that as far as he's concerned, she's his real family.