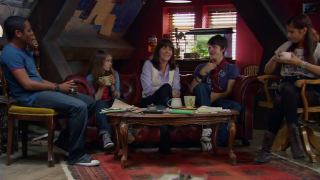 The unintentional final episode of the series, which unfortunately makes us bid goodbye to our beloved ensemble cast, and only made so because Elisabeth Sladen lost her fight with cancer.
Advertisement:

Team Sarah Jane investigates the owner of a computer company.

A female janitor at Serf Computer Systems listens to owner Joseph Serf's advertisement for his new computer, the Serfboard. She resentfully mutters where her billion dollars is. She approaches an elevator and is grabbed by an unseen creature.

Luke returns home from Oxford for a visit, making this his first face-to-face meeting with his new sister Sky. He notices that his old room has been given to Sky. He also shows his friends a special dog whistle he made for communicating with K-9.

Sarah Jane mentions that she has been invited to a rehearsal of the Serfboard's unveiling and invites her children along. At the Serf Systems office, Sarah Jane and her children run into Lionel Carson, her old editor who knows nothing about computers and still uses a typewriter. They are led into an auditorium by Harrison, Joseph Serf's head of public relations. Serf comes out and gives a presentation. His face suddenly pixelates, which Sky and Luke notice. After the rehearsal, all the guests are given a free Serfboard (which for some reason has both a touchscreen keyboard and a conventional keyboard). Lionel, despite his distaste for computers, is inexplicably impressed by the Serfboard. This, plus the "glitch" they saw earlier, makes the Smiths suspicious. Luke stays at the office to spy while Sarah Jane and Sky take the Serfboard home.

Back in the attic, Sky shows Clyde and Rani the video of Joseph Serf. Mr. Smith digs up Serf's background, learning that after a skiing accident, he became reclusive and appeared only publicity images. Team Sarah Jane notes that he never holds anything in his post-accident photos. Sarah Jane realizes that Serf died in the skiing accident and was replaced with a hologram. She calls Harrison to request an interview, dropping hints that she knows Serf's secret. Clyde and Rani stay in the attic while Mr. Smith analyzes the Serfboard. Mr. Smith finds nothing suspicious about the Serfboard. Clyde and Rani switch it on and find that not only is the Serfboard ordinary, it is substandard technology.

Sarah Jane and Sky meet up with Luke back at the Serf Systems office. Sarah Jane meets with Serf and Harrison. Sarah Jane keeps trying to get Serf to reveal that he is a hologram while she and Harrison keep tossing thinly veiled threats at each other.

Sky senses a high level of electricity coming from under the office building. She and Luke find a secret basement filled with one-eyed aliens who control all of the hologram Serf's movements, including his hypnotic powers.

As Sarah Jane keeps asking pointed questions, the aliens controlling Serf begin to panic and make mistakes. They try to hypnotize her but fail and Sarah Jane swipes her hands through Serf, exposing him as a hologram. Harrison points an alien weapon at Sarah Jane. Meanwhile, the aliens in the basement notice that they are being watched by Sky and Luke.

The aliens swarm around Sky and Luke, babbling in an alien language. Their leader, speaking English, tells them to escape.

Back in Serf's office, Harrison has Sarah Jane restrained by a security guard. He turns on a video feed to the basement and sees Sky and Luke. He orders security to capture them and presses a switch on his pen, activating the shock collars on all the aliens. He reveals to Sarah Jane that the aliens crash-landed in Central Asia and were sold to him as slaves. He intends to use the Serf hologram's hypnotic powers to get everyone watching the upcoming unveiling to want a Serfboard. He locks Sarah Jane in one room and Sky and Luke in another. Sarah Jane meets Adrianna, the cleaner who ran into one of the slaves earlier. Adrianna says that the slave was trying to escape and she is determined to help them. Sarah Jane and Adrianna trick a security guard, escape, and free Luke and Sky. They return to the hologram control room where the slaves are getting ready for the debut of the Serfboard. Sarah Jane sneaks up to the lobby and uses the phone to call Mr. Smith, who in turn signals a ship from the slaves' homeworld, Skultos.

Meanwhile, Luke uses his dog whistle to send a Morse code message. Though K-9 is too far away to hear it, Mr. Smith detects it and tells Clyde and Rani to grab Mr. Harrison's pen. Rani and Clyde create fake ID's of a married couple on Serf's guest list. They sneak in and pick the pen from Mr. Harrison's pocket. Sarah Jane sees this on the monitor and she and Adrianna lead the slaves to the roof.

Harrison starts the show before the ship has reached the Serf Systems office building. Luke and Sky have to operate the hologram alone, resulting in Serf making unnatural movements and saying strange things. Harrison realizes something is wrong, takes his pen back from Rani, and activates the slaves' shock collars. Sky and Luke turn up the hologram's hypnotic powers and tell everyone in the auditorium to grab Harrison's pen and smash it. They then hypnotically tell everyone that the Serfboard is a ripoff. The hologram then tells "Clani" to head to the roof. Team Sarah Jane reunites on the roof of the building where the ship is coming to pick up the escaped slaves.

Outraged, Harrison runs to the roof and tries to grab one of his escaping slaves, getting "beamed" into the spacecraft with them. The spacecraft flies away with Harrison onboard. Impressed with Adrianna, Sarah Jane gives her a UNIT card and tells her to consider becoming an agent.

This two-part story brought The Sarah Jane Adventures to a premature end after five seasons, due to the death of Elisabeth Sladen prior to any further episodes being shot. It is sometimes erroneously stated that this story was filmed as the intended finale of Series 5 (with earlier episodes to be filmed later), but this wasn't the case. 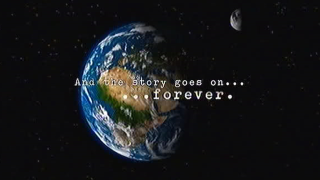 Sarah Jane: "I've seen amazing things out there in space. But strange things can happen wherever you are. I've learned that life on earth can be an adventure, too. But, in all the universe, I never expected to find a family."