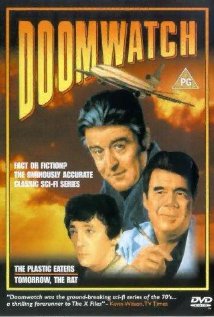 A short-lived science fiction BBC series from The '70s. Spencer Quist is the head of the Department for the Observation and Measurement of Scientific Work, or "Doomwatch," a government agency which investigates the deadly dangers of unchecked scientific progress. Despite its short run, the series drew in 13.6 million viewers at its peak and elicited topical discussions about embryonic research, noise pollution, animal exploitation, and other issues. Unfortunately, the series was not renewed past its third series and, as was standard BBC practice, many of the show's master tapes were wiped.
Advertisement:

The original series spawned a 1972 film adaptation, released in the U.S. with the title Island of the Ghouls. A Continuity Reboot series was attempted by Channel 5 in 1999, but did not elicit viewer interest past a Made-for-TV Movie aired as the pilot.