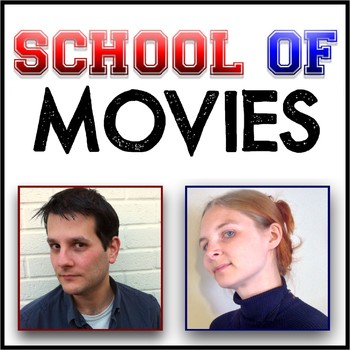 "Welcome to School of Movies."

School of Movies is a weekly podcast

where the two hosts, Alex and Sharon Shaw do in-depth synopsis, analysis, and sometimes even behind the scenes looks at movies. While they primarily focus on genre films that they personally enjoy and have a lot of personal interest in, they also cover other forms of media such as video games, comics, music, TV shows, and sometimes even just entertainingly bad reviews on the internet that they release under the catch all term of School of Everything Else. While new episodes are released under the main feed, the back catalog for School of Movies are archived here

while episodes of School of Everything Else are archived here

The podcast has undergone a number of iterations, going by Digital Cowboys, Digital Gonzo, and Digital Drift before settling on its current name. It also regularly has different guests on for certain properties, in part to encourage more thorough roundtable discussion and analysis, but also because those guests often have a special love or familiarity with the intellectual property under discussion. The current lineup always includes Alex and Sharon at least, with guests being brought in on a case by case basis.

More recently, they have expanded their remit further to provide entertaining and in depth discussion on properties that they do not especially enjoy: either through sponsored episodes, covering high profile movies that others love and they do not especially care for, or looking at the works of a director as a whole that are to the hosts, a mixed bag.

The podcast in general tends to center around (or be bookended by) one or more monologues by Alex that includes either personal introspection on what the movie means to him - both good and bad - or a commentary on the life and times that the movie centers around at time of release. The podcast will often include music taken from the soundtracks of said properties, audio from those properties to highlight specific scenes being talked about, or alternately audio from other properties (including comedians, other critics, and internet original content). The podcast tries to be as informative as it is entertaining, hence the specific retitling of the podcast to be referred to as a School.

, which have been expanded into full on audiodramas voiced by themselves, close friends and voice actors, as well as previous guests on the podcast. They initially came into creation as a result of people asking Alex more about what he would have wanted to see in movies and stories, based on what he did and didn't respond to in his preferred kinds of films.