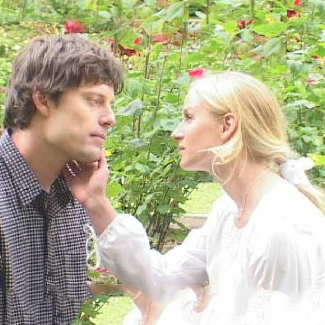 Julie and Jack is a 2003 independent film, directed by James Nguyen (of Birdemic fame).

Jack is in a dead-end job as a chip salesman, who joins an online dating site, at the insistence of his best friend Mark. He ends up meeting a mysterious woman named Julie Romanov. After a few months of dating, Mark soon realizes he really doesn't know much about Julie, but asking her about her past ends up pushing her away and breaking off contact. Jack then tracks down her old friends, and eventually her parents, only to learn some shocking secrets about his "girlfriend".

Incidentally, the fact that Tippi Hedren appears in this film allowed James Nguyen to later feature archival footage of her from this film into his later film Birdemic (which is a Whole Plot Reference to The Birds, which Hedren starred in) and claim in promotional material that she made a Remake Cameo in it.