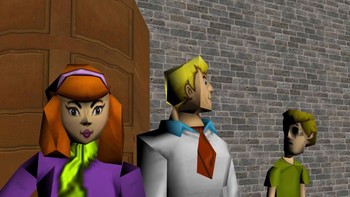 "Let's split up and look for traps...I mean, clues."
Advertisement:

The Scooby-Doo gang head to a mansion that Fred insists is haunted, despite the fact that it appears not to be. As the investigation continues, it becomes clear Fed has lured his "friends" here with a very sinister motive.

Noted for its use of Uncanny Valley animation and stitled, computer-generated voices, many viewers have stated that the short is much scarier than it should be.

Zoinks! We're really in for it now, tropers!