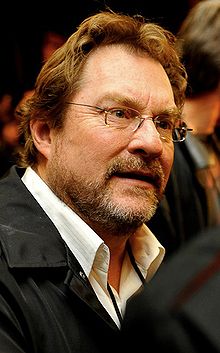 Stephen Root (born November 17, 1951 in Sarasota, Florida) is an extremely prolific American actor, comedian, and voice actor. He often works with Mike Judge, and is perhaps best known for his iconic role as Milton Waddams in the cult classic Office Space. He's also known for his roles King of the Hill, voicing Bill Dauterive and Buck Strickland. He made a big impression on NewsRadio fans as maybe-Benevolent Boss Jimmy James. He also works frequently with the Coen Brothers and is mostly typecast in racism-related projects such as as a blind racist radio station manager in O Brother, Where Art Thou?, the Fantastic Racist Val-Yor in a Very Special Episode of Teen Titans, another blind man in Get Out and finally Hawthorne Abendsen in the Nazi-anti-semitism-dominated world-set The Man in the High Castle.