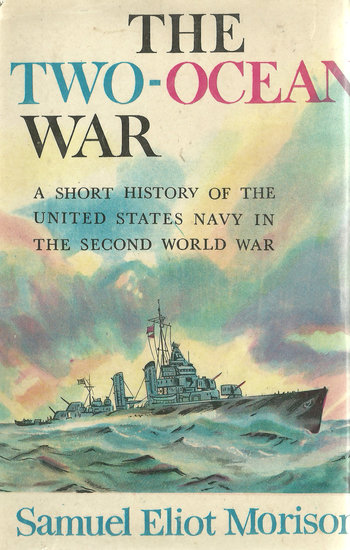 And this is just the abridged version.

Several authoritative writers—including Richard Frank, Rick Atkinson and Ian W. Toll—are at work on trilogies about that war. But only Morison will ever be, in Baldwin’s words, “a modern Thu­cydides.”
James Hornfischer, author of Last Stand of the Tin Can Sailors and Neptune's Inferno.

This is the history of the US Navy in World War II.note Technically, it's not an official history. See below. It was written by the historical scholar Samuel Eliot Morrison and sponsored by the US government at the authors suggestion. It contains information based on interviews conducted in several theaters as well as actual service as what is now called an "embedded reporter" in several units.

The full series is a fifteen volume set. A summary is also published called The Two Ocean War for those who wish to go to less effort. The Two Ocean War also includes a deal of analysis of the causes of the war and the nature of the interwar period navies. The whole series is written in a magisterial style and gives encyclopedic information about the war. To this day it has not become dated and is still respected by military historians as the go-to book for naval warfare. Its one major shortcoming—poor and/or inaccurate information about the Axis side, due to a lack of primary sources—is gradually being addressed by a later generation of scholars, as documents are uncovered and translations become available.