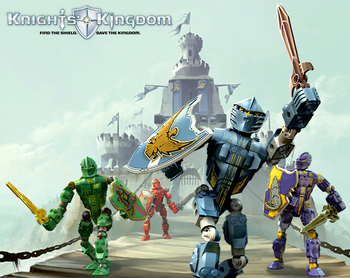 From left to right: Rascus, Santis, Jayko, and Danju.
Knights' Kingdom (often referred to as Knights' Kingdom 2 in order to differentiate it from the previous Knights' Kingdom line) was a LEGO Theme first released in 2004 and discontinued in 2006. It is a character-driven Medieval European Fantasy set in the fictional kingdom of Morcia.
Advertisement:

In the first line of sets, King Mathias suddenly disappeared while his Obviously Evil adviser, Vladek, takes the throne in his absence. Four heroic knights - Sir Jayko the Quick, Sir Santis the Strong, Sir Rascus the Agile, and Sir Danju the Wise - investigate the king's disappearance and discover Vladek's true intentions to Take Over The Kingdom with Black Magic. Dodging Vladek's Brainwashed and Crazy Mooks along the way, the four knights go on a journey into the mysterious Moorlands to find the legendary Heart of the Golden Shield, which is their only chance against Vladek's Black Magic.

In the second line, Lord Vladek escapes to the neighboring kingdom Ankoria, which he takes over by force and begins amassing his army there. To stop Lord Vladek's inevitable attack on Morcia, King Mathias plans his own siege on Ankoria, and sends the four knights to infiltrate Vladek's Dark Fortress so they can lower the drawbridge and let the heroic army inside. However, Vladek has been collecting pieces of the Golden Shield to forge the Vladmask, which grants him unspeakable power...

In the third and final line, many years have passed since Vladek's defeat, and Jayko is now the wise and experienced King of Morcia. With all the fragments of the legendary Golden Shield in his possession, King Jayko recruits two younger knights, Sir Kentis and Sir Aldric, in a journey to find a blacksmith in the Mistlands who can reforge the shield. However, Lord Vladek recruits the Rogue Knights and also sets out on a quest to find the blacksmith so he can use the Golden Shield for himself.

A video game adaptation of the first line was released on the Game Boy Advance in 2004.

Among Adult Fans of LEGO, Knights' Kingdom 2 was largely derided and criticized, especially for the colorful armor the knights wore in the 2004 wave of sets and the BIONICLE-esque action figures released alongside the more conventional System-based playsets. However, the line does have its fans who appreciate its in-depth storyline, explored in far greater detail than any other LEGO Castle line.