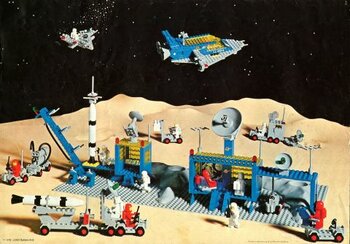 In 1978, LEGO first started producing space-themed playsets, and so what is today known as "Classic LEGO Space" was born. Stretching for a good decade from 1978 to 1988, this LEGO Theme was a 20 Minutes into the Future type of adventure dealing with very simple exploration of the solar system, establishing moon bases and conducting research on the planets. The sets were known for their bright palettes; most craft and buildings were bright blue, with a small few instead being a bright grey.
The Theme was phased out and succeeded by LEGO Space's Futuron faction, which utilized updated versions of the classic spacesuits in the same colors, except for white, which was now made a uniform secondary color.
In contemporary times, "Classic Space" has proven to be an iconic part of the brand's history, with a blue astronaut named Benny being a supporting character in The LEGO Movie, the Theme receiving several homages in sets, and new astronaut colors being introduced, such as pink, orange and brown.