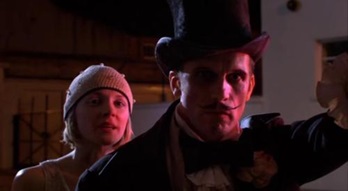 Silent movies aren't so silent anymore.
Christina: Your eyes are older than your face.
Jack: Is that a bad thing?
Christina: Yes. It means you don't belong. It means you're from nowhere.
— Jack learns another reason to regret immortality
Advertisement:

Gwen, Owen and Ianto go to the movies. It's a classic cinema where old silent film reels are shown.

Instead of the film that was supposed to play, they instead see clips of old freak show acts. One of the performers is Jack, who once made a living by shooting himself in the head over and over.

The projectionist is appropriately freaked out by this new film suddenly appearing. Torchwood takes the reels back to the Hub. Jack recognizes some of the performers from the old days, but notices that some others were never in his own freak show gang. Also, Ianto realizes that some people have disappeared from the reels: the hammy MC and a woman called "Pearl", who performed as a human mermaid. Jack realizes what's happening: the Night Travelers, an old hushed legend, was trapped on that film and is now freed.

The MC, known as the Ghostmaker, and Pearl traipse about town, stealing people's breath and rendering them comatose. The reason: by trapping these people's souls, they can have an eternal loyal audience.

Owen realizes he's immune to the MC (he has no breath to steal) and tries to capture him. Ianto secures the vial containing the victims' souls, but he only manages to save one of them. All of the villains escape from the reel, but Jack films them and exposes the film to sunlight, killing them again.

The moral: don't neglect the old film reels in your attic, because they could contain murderous clowns.

If you're wondering how we got an episode that's just so plain weird, it's because Russell T Davies convinced PJ Hammond, creator of Sapphire and Steel to contribute to the series, bringing his own brand of strange horrors from out of Time to the series.