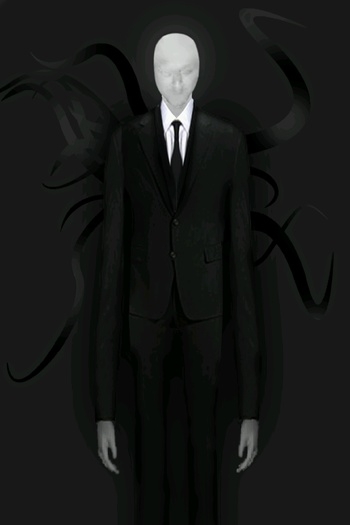 The creature who started it all in the Mythos. An inhumanly tall and skinny figure apparently dressed in a black suit, whose face is either completely blank or appears different to anybody who sees it, depending on who you ask. His goals, and sometimes his methods, are shrouded in mystery, but he tends to leave a wake of madness, destruction, and death behind him.

A mysterious figure who originated on White Elephants. He captured, tortured, and wiped Robert's memory clean of any knowledge about Slender Man. Then took over White Elephants to try to break the Slendercommunity by taunting them with Robert's defeat, then flaunted how powerful his master is and that the bloggers need to learn their place.

A primary villain of A Hint of Serendipity.

One of the villains of The Last Refuge of a Dangerous Man.

Author of the eleventh hour

. She's the daughter of Cathy, The Protagonist of Time to Talk

and under the Slender Man's control. She's a devout believer in his cause and sees him as her daddy.

Though nowadays it seems she's fighting back, and winning.

A man, twisted by The Slender Man's memory manipulation causes him to constantly forget things, and is given orders to assassinate Runners, with the reward being food and somewhere to sleep.

Acts as a messenger within the mythos, announcing deaths and ending blogs. Ends up becoming an Oracle for the Slender Man. From Don't Shoot The Messenger.

A former businessman and the primary human antagonist during Seeking Truth's run. He ultimately perished the night of the Warehouse Fire, though the exact circumstances remain unknown.

Author of The Morning Hunter

Characterized by a startling shift between horror, placidity, and Looney Tunes style violence.

An upbeat lover of all things Japanese who seems to have a tenuous-at-best grasp on reality. Her real name is Erika Lyons, though she insists on "Nee-chan" or at least "Eri." A prominent character in Don't Shoot The Messenger.

A former SWAT demolitions expert, he was a former partner of Zeke Strahm's and ultimately the secondary antagonist of The Mystic blog.

An assassin that claims to work for the Slender Man. He kills the people Slender Man doesn't care to personally deal with. He keeps two separate blogs, one that is a basic journal

The author of What You Are in the Dark, Reach is one of the Slender Man's former Agents, now an Anti-Hero of sorts.

. Uses a Chess Motif to discuss the battle against the Slender man, in the past and present. Is implied to have a Dark and Troubled Past.

Author of Make it Count

, and an Intrepid Reporter, who is given advice from Zeke Strahm.

A Detective whose partner Lizzie set up his blog, Seeking Truth, to cope with the recent disappearance cases he's dealing with. He eventually discovers that he is dealing with the Slender Man and decides to take him down.

A college student from New Zealand. Also known as Viv, Vieve, Vivi, Vi, or any variant on those. A troper who works at a restaurant. Primary author of Exilis Veritas

, although her boyfriend Chester also makes frequent posts on the blog beginning in mid-December. Currently (thankfully?) no longer 'infected' by the knowledge of the Slender Man via Laser-Guided Amnesia.

Genevieve's boyfriend, and the secondary author of Exilis Veritas

. Also (thankfully?) no longer 'infected' by the knowledge of the Slender Man via Laser-Guided Amnesia.

The theatrical and deeply troubled author of Strike the Set

A socially outgoing southern woman in her mid twenties who is drawn into the Mythos through a discarded notebook she finds on a park bench. Author of Take The Myth

, where she, along with her roommate Cam, attempts to research the Slender Man in order to help those stalked by him survive.

Elaine's outspoken nature and habit of not mincing words causes quite a few people to dislike her, but her attempts to help those around her makes quite a few others see her as a pillar of the community.

Author of The Tutorial, veteran Runner and progenator of the Three Rules.

Proprietor of the "compileTRUTH" Youtube channel and blog. Has spent most of his time "compiling" other blogs and vlogs, creating summaries of important events in other stories. Despite the alias, it's well known that he's merely a college student.

Leader of the Return To Slender

team. Lives in an Eldritch Location with a Ragtag Bunch of Misfits.

Claims to be the "Aspect of Hope", this curious individual appears occasionally within the mythos, helping those haunted by the Slender Man, whom he tends to refer to as the "Unseelie" or "brother".

Author of Journey Through Hell

A man who spends his life running instead of fighting. He tries every possible theory or method to prevent himself from being killed. He has no plan to defeat ol' Faceless as every one else who tries winds up dead.

A young musician who wrote songs for the Slenderbloggers and posted them to her blog, Breeze in Monochrome NIGHT

Author of The London Librarian, considered by some to be the spiritual successor of Robert, and cares enough about any of the bloggers she becomes attatched to that she threatens to kill them should Slendy find them.

Author of It's All David's Fault.

A nice enough young babysitter and film enthusiast who gets embroiled in an Ancient Conspiracy.

Protagonist of The World That Never Was

, a student who initially found cryptic messages directing him to M

and later found out to his horror, that he apparently never existed.

, his blog is unique in that Slender Man doesn't stalk him, but he goes to school with dozens of Slendy's people. Is now setting up his OWN group, the National Associaction in the Pursuit of Proxies and Agents.

A college student, like Jekyll above. He's generally polite, unless he's dealing with the Slender Man. Operates the blog Live in the Light.

A midwestern kid, who has shoes a bit too big to fill in when he goes looking for Slender Man. The writer for Believe What You See.

. A boistrous and smartalecy blogger who has been stalked for over a year now.

An amnesiac blogger who woke up in Pioneer Valley, Massachusetts. He was initially named Prey the 2nd (Ron being the other Prey). Has become something of a spiritual successor to Testing123's Shaun in experimenting with ways to ward off or fool Slender Man. He runs Search and Reveal.

Author of Walking the Hallowed Halls

. Takes care of the Slender Man's minions in exchange for his life. Is also searching for his twin brother, Ben.

and Dreams in Darkness. Is a complete skeptic (despite the hundreds of blogging victims warning him) up until The Reveal where his skepticism starts to slip...

A college student who prefers not to get close to anyone else. He posts advice on how to survive, much like M. Writes Now I Shall Know You Again

Originally another successor to Robert on White Elephants, now the author of her own blog, Upon the Stairs

The author of White Elephants, the progenitor of the Core Theory, the giver of Titles and one hell of an Unreliable Narrator.

Wrote Anomalous Data, experimented with Laser-Guided Amnesia, was rather morally ambiguous and supposedly died in a Heroic Sacrifice.

The protagonist of Testing123, Shaun threw himself into dangerous experiments in an attempt to help others.

The protagonist of A Hint of Serendipity, and badass, who attempted to sacrifice himself in a gambit to weaken the Slender Man enough for others to be able to kill him. It didn't work, instead driving Zero insane. He now hunts his fellow Slenderstalked in an attempt to create a weapon from the arm bones of people he has murdered.

The author of Road to the Heavens, one of the only female sages, Mama Bear, and kind ear for the other bloggers.

Trickster Mentor, Jester, and the author of A Really Bad Joke, Maduin is simply awesome.

Author of A Wand and a Prayer

. An experiment involving crystals to help ward off the Slender Man in her dreams ends up leading Kay down the road of her past, as her tragic past resurfaces, culminating in a confrontation with her ex, Tom.

Author of Records of an Impossibility

. Self stylized shaman who understands the metaphysical Astral Plane brings his knowledge to the fight. Amalgamation's most notable accomplishment was summoning the Jersey Devil to preoccupy the Slender Man during a rescue attempt.

Author of I Am Stardust

. A psych student, collaborator with Amalgamation Sage, and voice of sanity in the blogosphere.

Author of a now defunct blog, Enter Light, Nessa was never-the-less a major player in the Core Theory, forcing Zero into his Heroic BSoD, and being mindwiped by Redlight.

Has returned a year later with a new blog, Clarion Call.

Self-proclaimed Keeper, troper, fanfic writer, and protagonist of They Call Us Keepers/Let Us Live/ Let us Keep Living.