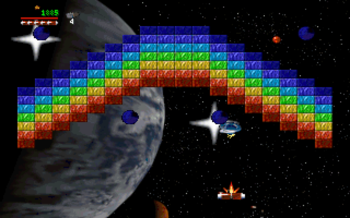 PowBall is an MS-DOS Breakout game made by Anthony Hamilton in 1995 and rebooted as PowBall Renaissance in 2015. It features 100 levels and several expansion / mod packs, as well as a full-feature level editor to add limitless variety. Players use the standard Arkanoid method of bashing bricks with Mining Balls to collect the gems inside, while avoiding hazards and space pirates. Players can use the gems they sell off to purchase a variety of tools and weapons to further their mining efforts. The game features a two-player simultaneous mode.

The story features a bleak world set in the 25th century. With 40 billion inhabitants, resources become more and more scarce with each day that passes, causing massive wars to break out over the remaining pockets. In a miracle of timing, a crystal was discovered that could be refined to any substance required. You are among a valuable asset of miners, known as the Rockhopper, tasked to mine this precious material from planetary debris to save mankind.