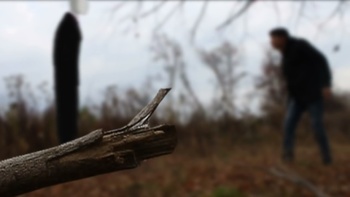 Spent the second half of my life making up for the first half.
Stan Frederick is a 20 year old man who lives on his own in Maine. He has a wife named Susan, a therapist named Serena, and a steady job of helping people out whenever he can. Then he gets followed by a strange man in a suit...
Advertisement:

Or, more accurately, he's the one following it.

In reality, Stan Frederick is another entry in The Slender Man Mythos, this one being a soft reboot of "StanFrederickBTS", which started in 2012 and ended in 2013. This unique series serves both as a primarily character-driven story and a minor Deconstruction (and later Reconstruction) of/meta commentary on the tried-and-true Slenderverse tropes. It has an in-game YouTube channel, which can be found here

, and a Twitter page, which can be found here