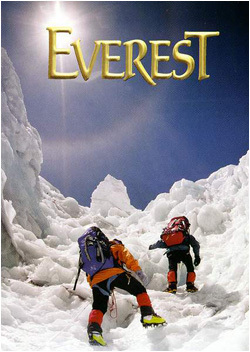 Everest is a 1998 theatrically released IMAX documentary, directed by David Breashears, Stephen Judson and Greg MacGillivray, and narrated by Liam Neeson. It depicts the real life struggles faced by mountain climbers when climbing the eponymous Mount Everest, on the borders of Nepal and the People's Republic of China.

Besides the expected depictions of mountain climbing and avalanches, the film crew was on the ground for the May 10, 1996 Everest disaster

. Eight people were killed during summit attempts and others were trapped in a blizzard. Since the film managed to record at least part of the events, it became historically significant on its own.

. It includes interviews with survivors, still pictures and footage taken during the 1996 IMAX expedition and reenactments of the events on the mountain during the storm.

In 2015 a film came out with the same name as the IMAX film which dramatized the events of the tragedy.