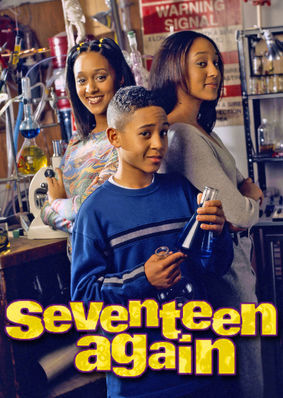 Seventeen Again (NOT to be confused with the 2009 film starring Zac Efron) is a classic "Freaky Friday" Flip movie starring Tia and Tamera Mowry and younger brother Tahj Mowry but with a twist: Kid genius Willie Donovan's experiment goes awry and somehow turns his divorced grandparents Cat and Gene into teenagers. Cat is the spitting image of granddaughter Sydney, while Gene reverts to his attractive former form.

Everything is great in teenage land until it is revealed that the effects of the backwards aging are not only temporary but lethal. It is up to Willie to get his grandparents back to their normal ages and for his estranged grandparents to find their ways back to each other. Early noughties nostalgia ensues.