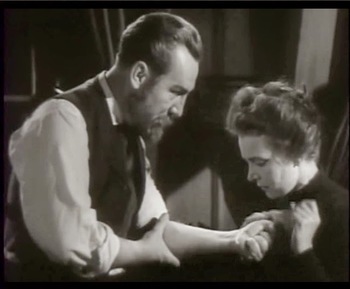 The Curies at work.
Advertisement:

It is a documentary short about early research into radiation and the isolation of radium. The short starts with Henri Becquerel, a physicist in the latter 19th century who had a thesis that certain ores would, if they were exposed to natural radiation from the sun (i.e., light), later emit that radiation, which might fog a photographic plate. As the short demonstrates, persistent rainy weather caused Becquerel to store his uranium ore and plates inside in a desk. When he went to retrieve them Becquerel found that the plates had been fogged despite neither the ore nor the plates being exposed to sunlight. This was the accidental breakthrough that led to the discovery of radiation.

Becquerel then brings his findings to physicists Pierre and Marie Curie, who by painstaking labor isolate the compound radium chloride. While radium is soon discovered to be very dangerous, it is also used in medical treatments. The short ends with Pete Smith as narrator musing on how radium will continue to be used far into the future as a healing chemical.