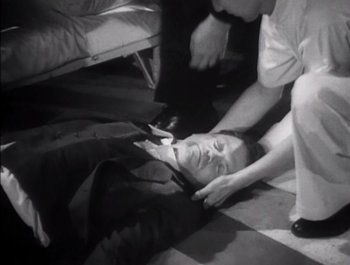 It is an installment of MGM's Crime Does Not Pay series, a series of short films in which dastardly criminals were brought to justice by fearless, dedicated policemen. This one deals with an insurance scam. A slimy lawyer by the name of Milton Beecher runs a racket in which his goons fake getting struck by taxis. The taxi drivers, the victims, and the "witnesses" are all in on the scheme and are paid with the proceeds from the insurance settlements that Beecher collects.

Milton's latest fake victim, "Little Davie" Barkell, is still in the hospital. A cop named Larry Martin obtains a glass from Barkell's room and confirms by fingerprints that he has a criminal record. Larry, in disguise as a heavily bandaged, comatose accident victim, gains admittance to Barkell's room and overhears Barkell and Beecher discussing their scam. Larry then dons another disguise, that of a hospital orderly, and worms his way into Beecher's organization.