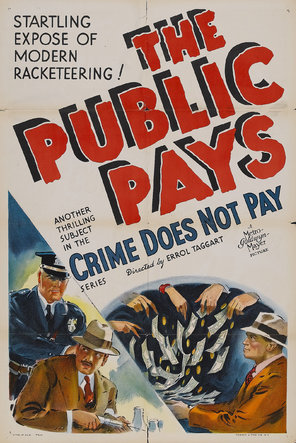 The Public Pays is a 1936 short film (19 minutes) directed by Errol Taggart.

It is an installment of MGM's "Crime Does Not Pay" series of shorts, which dealt with various aspects of gangsters and organized crime. This short focuses on the protection racket. A bunch of organized crime dirtbags led by a guy named Moran come to a town pretending to be the "Creamery Betterment Association". What they are really doing is operating a shakedown racket in which they demand each dairy in town raise the price of milk three cents a bottle, and pay the racket a penny for every bottle of milk sold. Most of the local dairies cave, but Charlie Paige of Paige Creamery fights back. When Paige goes to the cops, Chief Carney comes up with a plan.