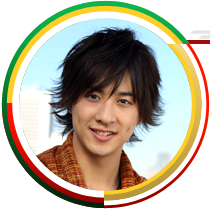 A world-traveling vagrant with no family, dreams, or long-term career, whose recent stint as a museum guard for the Kougami Foundation ends with him taking possession of three Core Medals and the OOO Driver, allowing him to turn into Kamen Rider OOO and fulfill his subconscious impulse for helping people.

Tropes exclusive to him as Kamen Rider OOO

Voice/Live Actor: Ryosuke Miura
Suit Actor: Eitoku/Satoshi Fujita (hand)
The Bird Greeed and a dishonest wildcard who was released along with the other Greeed — in the form of his right arm. After encountering Eiji and turning him into OOO, he takes over the half-dead body of Shingo Izumi, a police detective whom Eiji met earlier in the story, to become his temporary vessel even as he keeps an eye on Eiji.

Live Actress: Marie Kai
Owner of the Cous Coussier, a cosplay restaurant themed on international cultures.. She hires Hina on account of her Super Strength, and later (and on Hina's recommendation) Eiji on account of his knowledge of foreign cultures garnered from the years he spent as a world traveler.
Hina Izumi

Live Actress: Riho Takada
Shingo's younger sister. After learning from Eiji of what became of her brother, she urged him to join her as a coworker at the Cous Coussier, not only because of his extensive knowledge of foreign cultures (which the restaurant uses as its cosplay themes), but also to look after her brother's body, now occupied by Ankh.

A company that has been researching on the Greeed since they found a sarcophagus containing them in their art museum. Also seems to fit the Omniscient Council of Vagueness trope. There main goal seems to be harnessing the power of the Core and Cell Medals for the betterment of mankind. The members are as follows:
Kousei Kougami

Live Actor: Takashi Ukaji
The very eccentric president of Kougami Foundation. A firm believer in the power of desire and the beauty of the birth of all things, good or bad, he is also known for his odd habit of making birthday cakes whenever he's not bending Ankh, Eiji or the other Greeed to his will.
Erika Satonaka

Live Actor: Yu Kamio (adult) / Hayato Watanabe (child)
Suit Actor: Yuugo Fujii
One of Kougami Foundation's brightest scientists, in charge of its Biotech Laboratory, as well as the inventor of the Birth system. Late in the series, he becomes a Greeed and becomes the Big Bad.
Kamen Rider Birth

An experimental Kamen Rider suit using the expendable but common Cell Medals, as opposed to OOO and his rare Core Medals. 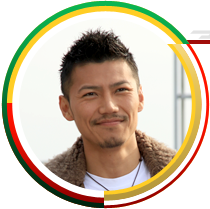 The first full-time wielder of the Birth system and, like Eiji, a world traveler who only came back to earn funds for his travels. 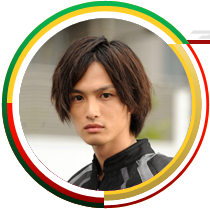 The Big Bad Ensemble of the show. They were artificial creatures created by humans 800 years ago, only to evolve beyond their control and begin a competition for title of "Multi-King", only to be sealed away by the original OOO. Ankh is one of them, but doesn't get along with them. They also have a Theme Naming going on, each ones name revolves around a desire, except Ankh, who is the Odd Name Outnote Though he did have a name that followed the naming scheme in early production stages.. They feed off human desire and greed by using their Yummy to turn it into Cell Medals. According to Ankh, they also have a habit of regularly turning against each other.

In truth, it was the original OOO who made them, in order to Take Over the World and become immortal by absorbing Medals of other living beings; Ankh helped him, hoping to backstab him later. Unfortunately, OOO went out of control and caused the Greeed to be sealed, except for Ankh's body due to only his right arm being sealed.The members are as follows:

Voice/Live Actor: Taito Hashimoto
Suit Actor: Jun Watanabe
The Feline Greeed and a cunning schemer. His Yummies have a habit of devouring their hosts once their desires are satisfied.
Gamel

Voice Actor: Miyu Irino
Live Actor: Hikari Tobita
Suit Actor: Masashi Takada
A mysterious Greeed who turns out to be the rest of Ankh's body animated with a mind of its own.
Yummy
The Monster of the Week. They're created from human desire by the Greeed for the purpose of creating Cell Medals. They start out life as identical faceless mummy-like creatures called White Yummy that are made from a Cell Medal inserted into a human host by their master. They then proceed to eat the thing their host desires, and a lot of it until they finally become their animal-like complete form, but they can still continue to eat to become stronger. This food is converted into Cell Medals, which 'bleed' out when the Yummy is wounded; when they're destroyed, they explode into a shower of Medals, the stronger the Yummy, the more you get.

Characters who just don't seem to fit anywhere else, be they allies, villains, or something in between.

King of a lost European kingdom 800 years ago, when the Greeed and OOO were created. He created the Greeed and the OOO Driver in order to absorb their power and become a god. He teamed up with Ankh to defeat the other Greeed, but ended up literally backstabbing him, only to die from being unable to contain all the power he absorbed, transforming him into the stone sarcophagus the Greeed were sealed in.

A descendant of Akechi Mitsuhide, the man who killed Nobunaga. Wishes to be a dancer.
Giru

Voice Actor: Kenji Hamada
The original Dinosaur Greeed who appeared in Movie War Core. His Yummies are the antithesis of those created by the other Greeed, intending to destroy all desire. Due to Movie War Core being a Non-Serial Movie, he never shows up in the series proper. At least, not as his own character....
Kamen Rider Core

Voice Actor: Fumihiko Tachiki
A being born from the Memory Memory and Nobunaga's black Core Medals, Kamen Rider Core is the embodiment of memories of all previous Kamen Riders. He battled and was defeated by Kamen Riders Double Cyclone Joker Gold Xtreme and OOO TaJaDor.

Voice Actor: Hideo Ishikawa
Suit Actor: Jun Watanabe
Yes, Shocker made themselves a Greeed thanks to For Want of a Nail.
Great Leader of Shocker

The Great Leader of Shocker

Characters in Kamen Rider OOO Wonderful: The Shogun and the 21 Core Medals

Played by: Ken Matsudaira
As denoted by the film's title, Yoshimune, 8th Shogun of the Tokugawa Shogunate, is central to the film's plot and helps Eiji in his quest.
Gara

Live Actress: Miki Sakai
Voice Actor: Ryuzaburo Otomo (kaijin)
Suit Actor: Yuugo Fujii
The film's Big Bad. An alchemist from 800 years ago who helped create the Greeed. He is reawakened in modern times to try and succeed where the first OOO failed.
Belle

Live Actress: Karin Ogino
Summoned from a handful of Cell Medals, there are actually three of her, sent out among the masses to harvest their greed.

A Kamen Rider from 40 years into the future, who transforms with the Aqua Driver. He also gives Eiji the Super Taka, Tora, and Batta Medals, allowing Eiji to transform into Super TaToBa later in the film.

Tropes exclusive to him as Kamen Rider Aqua

A mysterious Kamen Rider from the future, using three Core Medals and the Poseidon Driver created by the remnants of the Kougami Foundation in the future. In reality, the collection of Core and Cell Medals sent into the future upon Eiji and Ankh's defeat of Dr Maki and the Medal Vessel, which possesses Michal Minato and goes back in time. Overpowering the two Kamen Rider Births, Eiji can only look on until Ankh returns from the future and aids Eiji, allowing the latter to become OOO again.