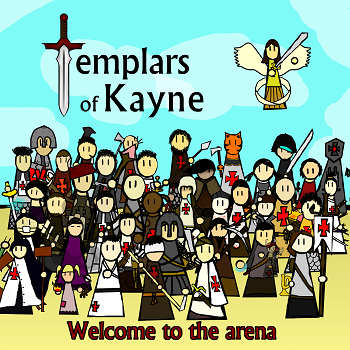 A small selection of the characters
Welcome to the arena.
Advertisement:

Templars of Kayne is a quick to play strategic board game designed by Forsaken Games. It consists of the training battles held by the titular templars of Kayne, giving each player a small force of 3 to 5 of said Templars and getting them to battle it out until only one side is left standing. Two notable things about the game are the cartoonish triangular character art, and the speed of play, which is designed to imitate traditional wargaming while only taking quarter of an hour to play a game. There are currently 3 games associated with Templars of Kayne: Welcome to the Arena, the main game, with the board, 40 templars, and the rules; Enter the Fray, an expansion allowing for up to 5 players to play simultaneously, as well as adding 5 more templars; and Join the Ranks, adding a further 20 templars.