For the Amazon Series versions of the characters, click here. 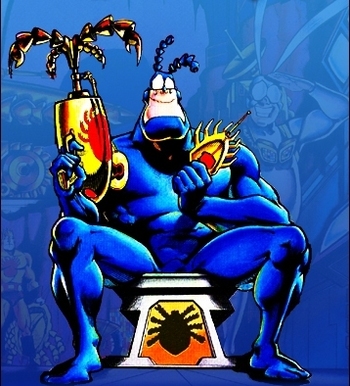 The boisterous big blue defender of The City no matter the version. Nigh-Invulnerable, Super strong, and a really cool set of head... thingies, he fights for justice, for The City, and for clean underwear. He is... The Tick.

A former accountant, and current moth-themed (though everyone tends to assume he's a rabbit due to his wings usually being retracted) superhero, he's The Tick's roommate and sidekick. A little neurotic and far more reserved than his partner, Arthur provides a grounded perspective the Tick desperately needs. 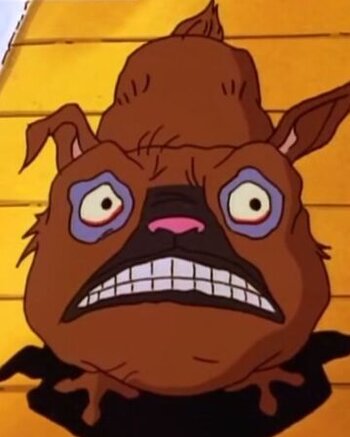 Appears In: The Cartoon

During a trip to the Amazon, the Tick was flung headfirst into the jungle by a catapult. Momentarily concussed, he encountered a 'wise spirit guide' in the form of a talking dog. When he came out of it, the 'spirit guide' turned out to be a passing capybara, whom he instantly adopted as a comrade-in-arms in his fight against evil. In reality (or what passes for 'reality' in the Tick's world), Speak is not an all-wise crime-fighting dog: he's a species of large native rat. Speak ends up living with the Tick and Arthur back in The City for the remainder of the series. 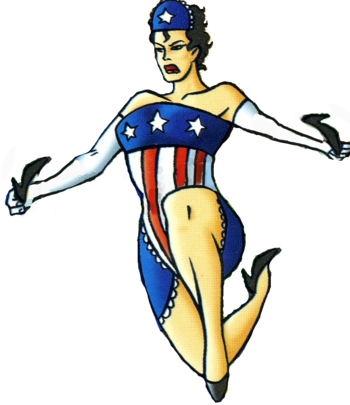 Appears In: The Cartoon
Portrayed By: Kay Lenz

The City's most competent hero. While frustrated with the Tick's antics, she respects his ability and drive to legitimately help the City. 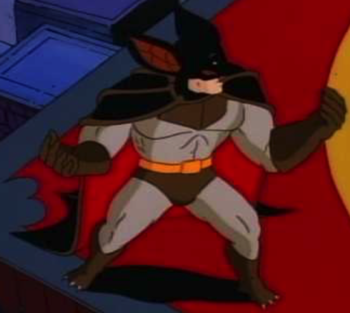 Appears In: The Cartoon
Portrayed By: Cam Clarke

A bat-themed superhero with a penchant for trying to hit on his fellow crimefighters (and failing at it) and for running away the second things get dangerous. 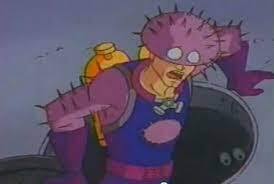 Appears In: The Cartoon
Portrayed By: Jess Harnell

Basically what you get when you combine Aquaman and Rain Man. One of the Tick and Arthur's closest friends, Sewer Urchin is a sewer-dwelling man who dresses in a prickly costume and aqualung. Mocked for his social awkwardness and clinging odor, it turns out he's actually a very skilled adventurer in the sewers, who just is out of his element in the surface world. 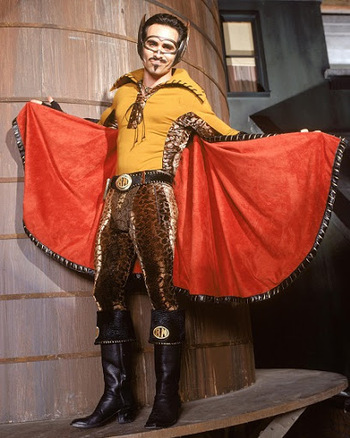 Appears In: The Live Action Series
Portrayed By: Nestor Carbonell

A Dashing Hispanic version of Batman. A lecherous, cowardly, moron who hits on Captain Liberty constantly. 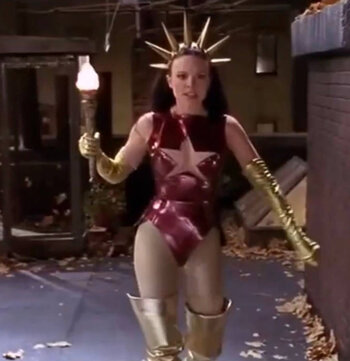 Appears in: The Live Action Series
Portrayed By: Liz Vassey

A patriotic superhero working for the government. Has a complicated relationship with Batmanuel after a one-night stand at the beginning of the series. Her real name is Janet. 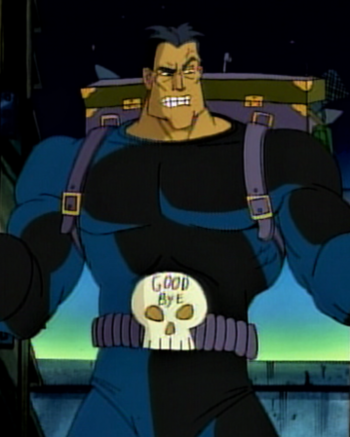 Appears in: The Comics and The Cartoon
Portrayed by: Kevin Schon

A gun-toting psychopathic superhero with issues. 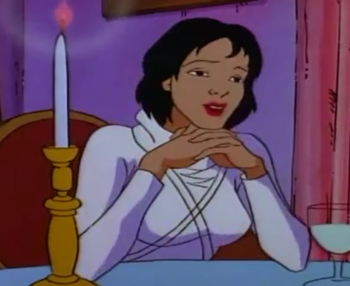 Appears in: The Cartoon
Portrayed by Jennifer Hale

The daughter of the man who designed Arthur's flying suit. 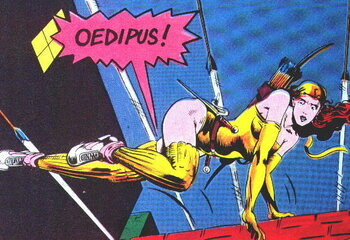 Appears in: The Comic

The daughter of a wealthy man who took ninja lessons instead of ballet.

Agrippa, Roman God of the Aqueduct 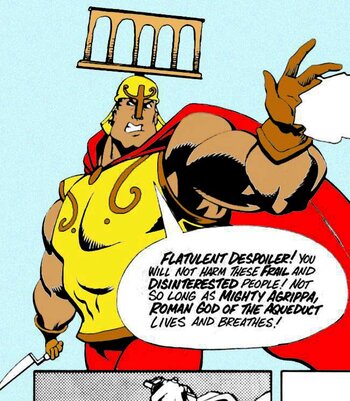 Appears in: The Comic and Cartoon

An obscure member of the Roman pantheon of gods who has turned to crimefighting. 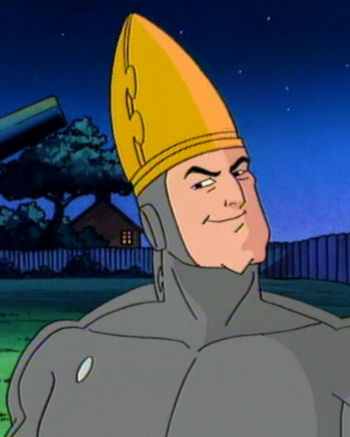 Appears in: The Cartoon 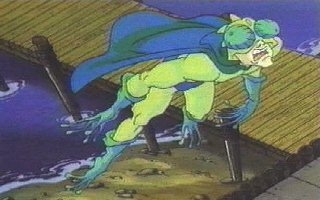 Appears in: The Cartoon

A chameleon-themed superhero who doesn't do much.
Supervillains 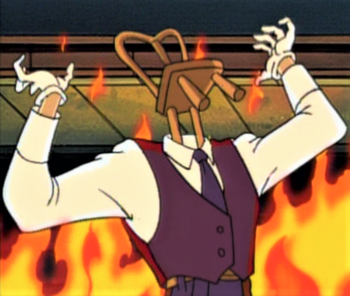 Appears in: The Comics and the Cartoon
Portrayed by Tony Jay.

A crime boss who has a chair for a head, also a sword fighting expert. 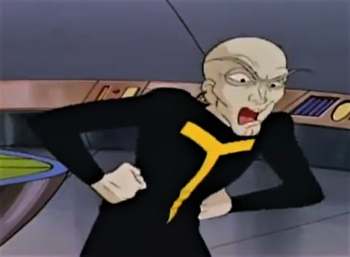 Appears in: The Comics and the 2001 Live Action Series
Portrayed by Carrick O'Quinn

The Evil Midnight Bomber (What Bombs at Midnight) 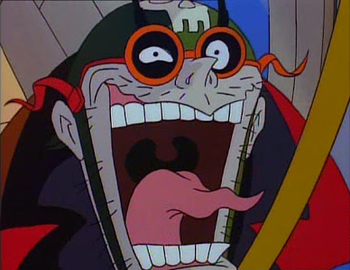 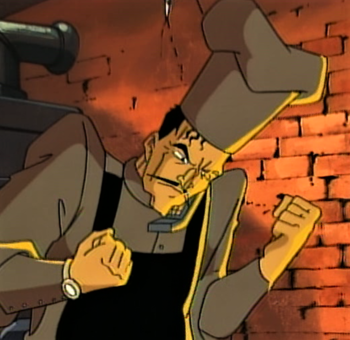 Just what a says, a terrorist bomber who makes expanding and explosive breads, Aided by a person named Buttery Pat, a man literally made of butter. 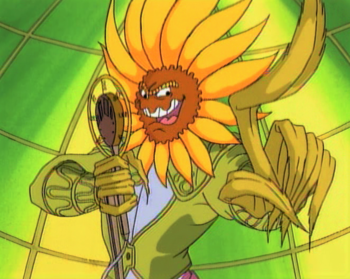 A humanoid flower bent on spreading a floral revolution. 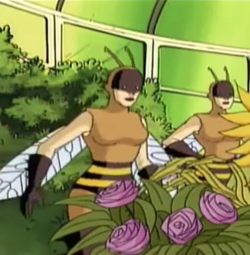 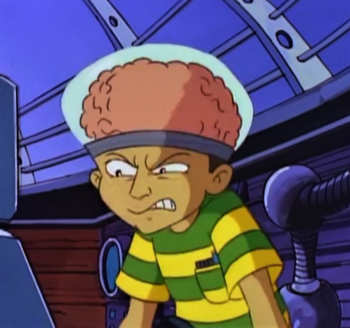 A young evil genius who has an exposed brain inside a dome and schemes to make a name for himself for villainy. 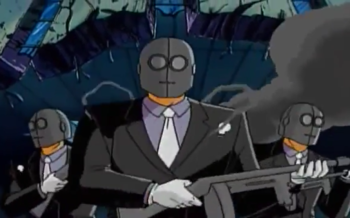 A group of thieves who wear iconic metal masks and tuxedos on their heists, and travel around in a huge blimp with their Idea symbol on it. 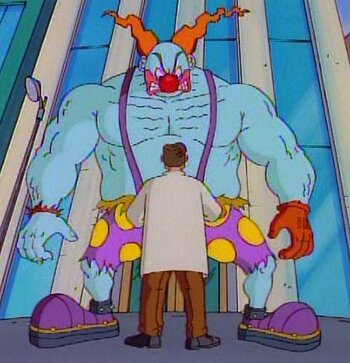 A creature who happened to resemble a clown, but with superhuman strength who went on a rampage. 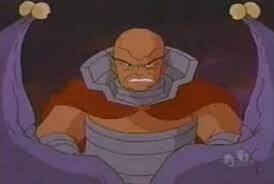 Lou Salazar was the most corrupt sanitation commissioner The City has ever known. He tried to take over with an army of filth — a species of Blob Monster created from the garbage and grunge that accumulates in the sewers, but was thwarted by Sewer Urchin at some point prior to the series' start. His first in-series appearance is in "The Tick vs Filth", where he tries to take over again, this time with an army of smart filth. 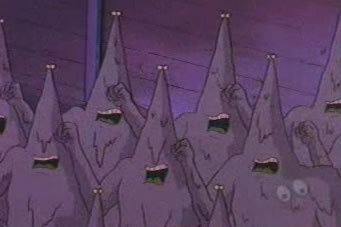 When The Sewer Czar's first foray in taking over the city failed, he decided that it was due to his minions' incompetence. So he whipped up a new batch of smarter filth. While they are able to follow his directives more effectively, they are also able to question why they should attack the surface world in the first place.