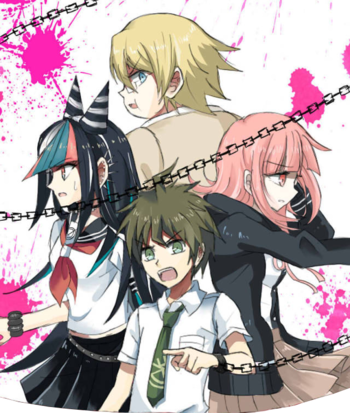 Fanart by gilvinodrovinel shared on the author's blog.

By its very nature, this fanfiction contains spoilers for all of Danganronpa 2. Please take that into consideration before reading.
Advertisement:

When Monobear took over the school trip, nobody wanted to participate in his Deadly Game of mutual killing. Well. Almost nobody. Like it or not, the tragedy was kick-started despite Byakuya Togami's attempts to prevent it.

But what if the first murder played out differently? When one plan fails, and another succeeds... How will changing the victim change their fates?

sets out to answer that question, as well as explore the friendship that develops between Hajime Hinata and the canonical first victim as they struggle to prevent any further deaths.

Compare Three-Point Shot and I'd Trade My Life For Yours, two Danganronpa V3 fics with similar premises (the latter author was even inspired by this fic).