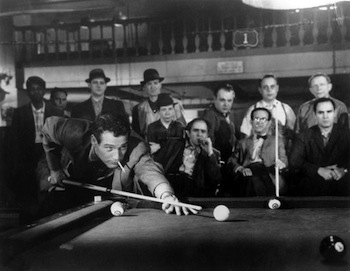 Bert: I don't think there's a pool player alive shoots better pool than I saw you shoot the other night at Ames [against Minnesota Fats]. You got talent.
Eddie: So I got talent. So what beat me?
Bert: Character.
Advertisement:

The Hustler is a 1961 drama film directed by Robert Rossen, adapted from the 1959 novel of the same name by Walter Tevis. It stars Paul Newman, Jackie Gleason, Piper Laurie, and George C. Scott.

"Fast Eddie" Felson (Newman) is a talented but overconfident and undisciplined pool hustler who tries to prove himself by challenging legendary pool player "Minnesota Fats" (Gleason). After Felson loses to Fats, he takes up with the heavy drinking Sarah Packard (Laurie) and starts a relationship with unscrupulous manager Bert Gordon (Scott) that ultimately proves costly both professionally and personally.

The movie was nominated for nine Academy Award nominations, but only won two (Art Direction and Cinematography). Newman played "Fast Eddie" Felson again in the 1986 sequel, The Color of Money, and won an Oscar as Best Actor, making him one of six actors who have been nominated for an Oscar twice for playing the same character.note The other five being Peter O'Toole, Al Pacino, Bing Crosby, Cate Blanchett and Sylvester Stallone. In 2008, it was ranked #6 on the American Film Institute's list of the 10 Greatest Sports Films of all time.

For the trope about Professional Gamblers who play others for money, click here. Not to be confused with Hustlers from 2019, or the 2021 game show The Hustler.

The Hustler provides examples of:

Eddie: Fat man, you shoot a great game of pool.