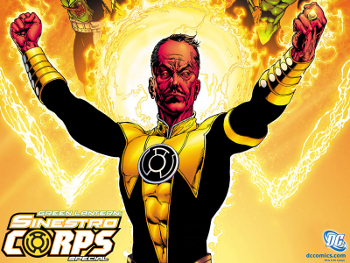 To think that baldheaded fool and that miserable clown would have pages before me...

And now that I have one, beware... I will have my revenge.

Formerly Green Lantern of the planet Korugar in space sector 1417 and arch nemesis of Earth's so-called premiere ring-bearer Hal Jordan. I was created by the likes of John Broome and Gil Kane - who incidentally, modeled me after a Terrestrial actor called David Niven - and made my debut in issue number 7 of the first series of Jordan's title in 1961.

I sought to use my ring to preserve order my way and had hoped to use my methods rather than those of the Guardians of the Universe to bring total peace to my planet, then my sector and finally the universe itself. I was known as the greatest Green Lantern and my sector was the safest in the universe. However, Jordan, that fool from that primitive planet Earth, didn't like the measures I took to make my sector safe; he believed I was a dictator who ruled with an iron fist and caused the Guardians to brand me a renegade and to send me to the Anti-Matter universe of Qward, where I was granted my own power ring, which was yellow in color. Of course that meant that the Green Lantern rings were powerless against it. Still, Jordan would manage to thwart my plans time and again, eventually resulting in my imprisonment inside the Central Battery of Oa while the Guardians went away with the Zamarons.

Eventually, the Guardians returned and called upon me to stop Jordan, who had gone mad due to the loss of his Terran hometown of Coast City and was seeking the power of the Central Battery. After an arduous fight, it appeared that Jordan had killed me prior to his entering the battery to become Parallax.

The truth was, that was a hard light duplicate created by the true Parallax and controlled by me. Once the Battery was destroyed, I was truly released and hid as I watched the Parallax-possessed Jordan become the very traitor that he despised me for being. What I did not count on was a surviving Guardian granting a power ring to a neophyte and dirty alley rat named Kyle Rayner. Soon enough, he had discovered the existence of Parallax. Of course, I made my presence known and was about to kill him and that miserable bowman, when Jordan, who had previously sacrificed his life to reignite the Sun and become The Spectre, came back to life, purged of any influence of Parallax. The two of us fought to a draw with Jordan damaging my ring, forcing me to escape to the Anti-Matter Universe.

Soon enough I encountered there the Anti-Monitor, who had engineered the Crisis on Infinite Earths, and embraced the doctrine of spreading fear. In order to counteract Jordan and the reborn Green Lantern Corps (Whom I will admit have improved their rings to finally be able to directly affect the color yellow for at least their hardened troops), I decided to form my own army... the Sinestro Corps! I offered Rings like my own to the most fearsome warriors in the universe! Together we would spread fear and our own ways of policing the universe. Of course, the Green Lanterns had to be eliminated first. Or at least, I had to make the Guardians change certain policies to truly make their corps a serious police force, ready to apply appropriate measures when necessary. As it happened, I achieved that secondary goal and even my naive opponents like Jordan and Stewart grudgingly agreed with me in principle with this reform.

But that was only the beginning. Soon enough, more Ring Corps emerged. The result... the Blackest Night, followed by the so-called Brightest Day.

After that fiasco, I was pulled into a hunt for the emotional entities. Then Krona reappeared and used the entity represented by my Corps, Parallax, to seize control of the Green Lantern Corps. With Parallax at his command, Krona overrode my ring and took it from me. After Jordan managed to kill him those idiotic Guardians expelled him from the Corps, resulting in his ring going to me, quite against my own objections.

I was captured by the Indigo Tribe at one point, and saved by Jordan. Finally, the Guardians proved what I've always maintained: That they are evil and should be wiped out. Not long after, the so-called First Lantern destroyed my home planet. I reclaimed the yellow light and vowed revenge, freeing my former Corps from their Sciencells on Oa, claiming Parallax for myself and aiding in the destruction of the First Lantern, followed by almost all of the Guardians themselves. With nothing left for me in this universe, I left to go on my own path.

That is, until my chosen wielder of the Yellow Ring in Jordan's sector used a ring, drawing me back to save the Earth from evil. After aiding the Earth, I have gone my own way with my daughter and my Corps to spread my message and preserve the universe to the best of my ability, including New Korugar.

I have been voiced by the likes of Vic Perrin and Don Messick, Ted Levine, John De Lancie, Miguel Ferrer, Xander Berkeley, Victor Garber, Jason Isaacs, Ron Perlman (because every person in the universe deemed evil has to be voiced by him at one point), Troy Baker and Darin De Paul. Mark Strong portrays me in the film. Luis Miguel Pérez and Raúl Anaya dubbed me into spanish four times each, more than anyone else! But I will never live down the... fact... that Charlie Callas played me as well.

Tropes associated with me: