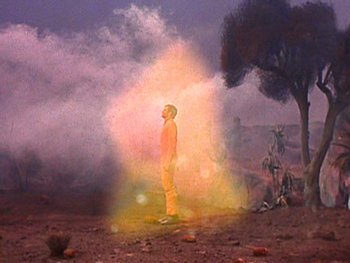 The Doctor's never had a Companion like this.
Advertisement:

Kirk, Spock, Bones, and our Girl of the Week, Nancy Hedford, are flying around on the Galileo shuttlecraft. Nancy is some Federation bigwig and apparently also a 1960s mod fashion aficionado. She was on an important mission when she contracted a rare space disease and is being brought to the Enterprise so McCoy can fix her right up again. But, of course, something goes wrong. No sooner has Kirk told Hedford that they'll get her back to her mission in no time, the shuttlecraft gets zapped by a Negative Space Wedgie and pulled off course. It's like nothing Kirk and Spock have seen before! Like all Federation officials who get stuck in unfortunate situations with Enterprise crew members, Hedford immediately starts acting demanding and unreasonable.

The Galileo gets deposited on some planet. Kirk and Spock can find nothing wrong with the shuttlecraft and yet nothing works. Suddenly, a man runs in wearing an orange jumpsuit. As we will learn later, he is Zefram Cochrane. Yes, that Broken Pedestal guy who will invent warp drive in Star Trek: First Contact. Or rather has already invented warp drive in... no, that's not right either. He now looks a lot younger than he did when he flew the Phoenix, but this actually gets explained. He introduces himself as just "Cochrane" (still doesn't like being a hero apparently) and flirts with Hedford. Explaining that he's been marooned on this planet for ages, he offers them his hospitality with an offer of a hot bath directed specifically at Hedford. She shuts him down with The Power Of Sarcasm. Evidently he hasn't gotten any more subtle since the drunk Troi days. Cochrane takes them all to his settlement, where Kirk, Spock, and Bones see the entity which brought them to the planet. After failing to convince them that it's a hallucination, Cochrane admits that "the Companion", as he calls it, brought him to the planet and rejuvenated him, as he was an old man near death. This effectively resolves a Plot Hole which won't exist for thirty years, but there's a less resolvable plot hole coming up. He admits to being Zefram Cochrane and Kirk asks "Of Alpha Centauri? The discoverer of the space warp?" Cochrane agrees, apparently too lazy to say "That's Bozeman, Montana. Don't you know where First Contact happened, genius?" In any case, McCoy gasps that Zefram Cochrane died a hundred and fifty years ago, but Spock concedes that they Never Found the Body. Cochrane reveals that he can communicate with the Companion and that it brought the rest of them there because he complained about being lonely. Trouble is, Nancy is now dying of overacting and McCoy says she only has hours left.

Kirk orders Spock to create a viable weapon to use against the Companion. Cochrane agrees to cooperate, admitting that "immortality consists largely of boredom". Kirk figures that the Companion might be able to cure Hedford, so he gets Cochrane to ask it. It turns out Cochrane and the Companion communicate with each other using some kind of nonverbal symbiosis. Unfortunately, the Companion can't do anything to help Hedford. Yes, rejuvenating a near-death 87-year-old man into a thirties-looking guy is a piece of cake for this Companion thing, but it's out of the question for it to cure the same disease which McCoy says he could cure in a jiffy if he only had the equipment in Sickbay. Meanwhile, Spock determines that the Companion is mostly electricity, so he creates a device to scramble it. Cochrane fears this may kill the Companion, but he reluctantly goes along with it, though not without throwing a guilt trip at Kirk. However, the device only succeeds in making the Companion mad. McCoy does his thing by suggesting that they try to reason with the entity instead and Kirk tells Spock to modify a Universal Translator. Meanwhile, the Enterprise reaches the point where the shuttlecraft was grabbed by the Companion and Scotty's solution appears to be flying in a random direction which he for some reason supposes was the course they were pulled off on. Back on the planet, Kirk talks to the Companion with the universal translator. When the translator gives the Companion a woman's voice, Kirk realizes it must be a female. It's immediately presumed that this means the Companion is in love with Cochrane as apparently a male human and his female entity couldn't possibly be Platonic Life-Partners. So what would that say if the Companion had been male? Kirk tells the Companion that they need to leave or one of them will die, but she says they need to stay to keep her dear Zefram company and refuses to hear of any holes in this plan.

But for the past one hundred and fifty years, Cochrane has been Oblivious to Love and failed to notice that his best friend was a girl (typical guy). Cochrane insists that She Is Not My Girlfriend and McCoy replies that Everyone Can See It. But for Zefram, it's drunk ship's counselors and islands of naked women, thank you very much! The Companion's just not his type and he storms away. Nancy, however, seems to be jealous of Cochrane for being loved as she is Married to the Job and seems to regret that now that she's dying. Kirk talks to the Companion again and plays the "if you really loved him" card. He ends up telling her that she can't properly "join" with Cochrane anyway since their forms are incongruous. This prompts the Companion to join herself with Hedford, curing her of her disease and making them one being. Spock mentions that the Companion can't create life and Hedford/Companion replies that "that is for the maker of all things". So... Carol Marcus then? In any case, this means she no longer has the power to keep them on the planet, having given it all up because she is such a Love Martyr. Kirk contacts the Enterprise, which apparently happened to follow the right course, and Sulu lays in a course for the planet. When Hedford/Companion tells Cochrane that she can never leave her planet, he chooses to stay. Kirk points out that there is a whole galaxy out there waiting to honor him. Yeah, great idea, Kirk. Cochrane just loves it when people make a big deal out of his accomplishments. Giving Cochrane his word that he won't tell the galaxy what became of him, Kirk takes the shuttle back to the Enterprise with Spock and Bones.