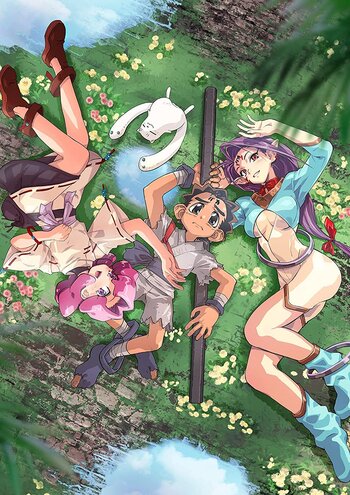 Photon: The Idiot Adventures is a 6 episode anime OVA produced by AIC.

The series was created by Masaki Kajishima (of Tenchi Muyo! note  in fact this series is part of the same universe fame) with directorial duties handled by Koji Masunari and with Yosuke Kuroda is the writer.

The main character, Photon Earth, is a young child who possesses superhuman strength, but is a bit simple-minded. While tracking down his childhood friend Aun Freya, who has stolen "the sacred artifact" (a marker) AGAIN, he gets lost and accidentally finds a crashed (space) ship. Made cranky by the fact that Aun ran off after he caught her, and by the fact that she wrote "Baka/Idiot" on his forehead while he was sleeping, he starts scribbling "Baka/Idiot" all over the walls of the ship in a rage.

Eventually, he writes it on the forehead of Keyne Aqua (who was in stasis after escaping from Sir Papacharino Nanadan) and then falls asleep on her, because she reminds him of Aun's older sister (who took care of him when he was young — but moved away after getting married). Neat little fact about marriage in that galaxy. Instead of giving each other rings, the guy will "claim" the girl by tattooing the symbol on his head onto hers. And guess whose doodling just activated the ship's wake-up routine?

Not to be confused with the "other" major laser tag game franchise of The '80s, or the live-action Sci-Fi series (made to promote the previously mentioned game) produced by DiC Entertainmentnote with miniatures made by regular AIC collaborator Artmic.