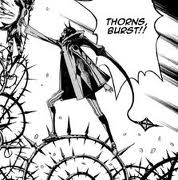 March is the main character of the story. When she was a little girl she became possessed by one of the Ill, but due to Jake's intervention the Ill went to sleep until such a time that she would fall in love with a man and let him inside her. To prevent this from happening she dresses up like a boy with only Jake being the wiser. Along with Belma she is one of the Ciste Vihad's hunters, though she dispises him due to her disagreeing with his methods for hunting the Ill. She sometimes seems to be developing a crush on Rodin.

Jake
An elegantly-dressed fortune teller with a huge head. She's one of March's allies.
Rodin
Belma

The Ill baby
Hueller
Kelpas
A beaver who became possessed by an Ill, which makes her anthropomorphic. She first appears in the story to kidnap March to make her a bride for her (adopted) son. However, unbeknownst to her, her son has already asked another girl to marry him. After this is explained to her, she becomes notable as being one of the only Ills not to be killed by the Ciste Vihad, and even visits Belma's restaurant every so often.