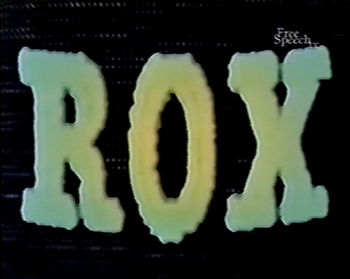 "...The trials and tribulations of a small group of idealistic Hoosier hedonists who don't wanna get real jobs."
—Program description published in the Indianpolis Star, January 1995
Advertisement:

In 1989, Bart Everson was convicted for streaking and carried out his sentence of community service at Bloomington Community Access Television (BCAT), a cable access channel in Bloomington, Indiana. It was there that he learned how to edit and produce videos for broadcasting on local television. By 1992, Bart had developed an idea for a BCAT show co-hosted by himself and his friend, bartender Joe Nickell.

The result was ROX — originally J & B on the ROX — a program which was initially devoted to teaching viewers how to mix alcoholic beverages while discussing various topics in increasingly drunken fashion, but which evolved to following Bart ("Editor B"), Joe ("Bartender J"), and their small circle of friends (most notably Bart's lover-then-wife Christy "XY" Paxson and self-styled anarchist clown Terry "T Black" Hornsby) as they live out their bohemian lifestyles on the social margins of Bloomington.

There is polemic critique. There is biting satire. There is an entire episode about defrosting a freezer.

ROX holds the distinction of being the first TV show distributed over the Internet, predating YouTube by over a decade. It is also notorious for pushing the boundaries of what could be shown on a cable access show — depictions of profanity, nudity, and all-around vulgarity were unapologetically common. Particularly controversial were the producers' position on decriminalizing marijuana, which included one noteworthy stunt where B and J smoked pot directly in front of the Monroe County Courthouse.

The first three seasons are considered to be a fascinating time capsule peeking into the stoner/slacker/grunge subculture of The '90s. Production ceased in 1995 due to financial difficulties (despite the show debuting globally online and nationally on Free Speech TV) and B and J later moved out of Bloomington to different parts of the country. A fourth season began in 2002 and has been shown at a dragging pace due to logistics, with the most recent episode premiering in 2018.

Not to be confused with a Flemish children's program of the same name.

Warning: the following tropes contain material which may not be suitable for young children or sensitive viewers. Sorry.